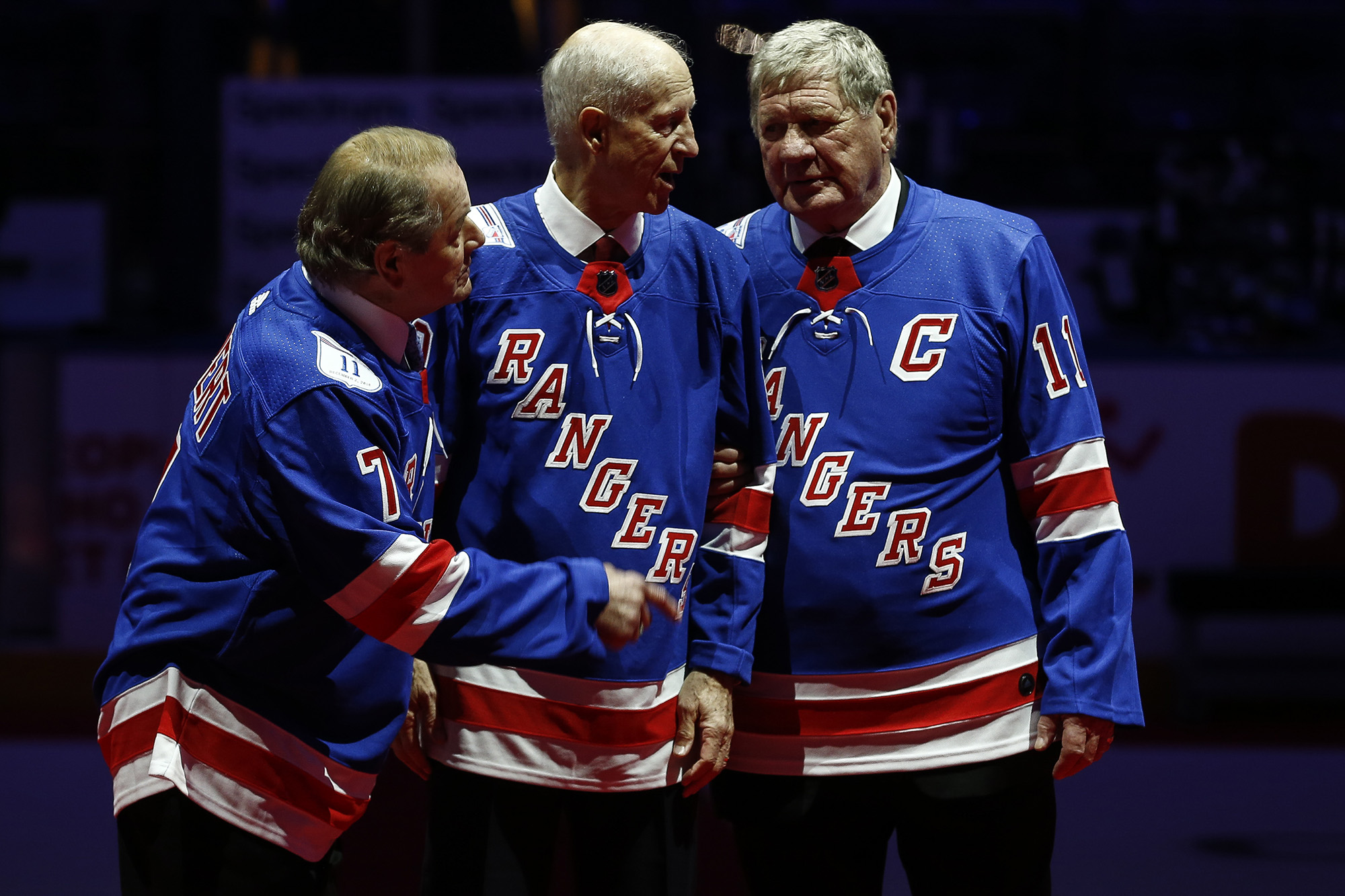 The subject was raised through an exchange on social media, it expanded into a discussion about the efficacy of the Trio Grande, which was the nickname for the Clark Gillies-Bryan Trottier-Mike Bossy line, and now has found its way into this ranking of the top 12 lines in New York/New Jersey hockey history.

12. Mike Peluso-Bobby Holik-Randy McKay (Devils): The Crash Line. Yes, I know all about the Grind Line in Detroit (Joe Kocur-Kris Draper-Kirk Maltby/Darren McCarty) that Scotty Bowman built in the Crash Line’s image a couple of years after his Red Wings had been swept by the Devils in the 1995 Cup final, but Peluso, Holik and McKay blended their talents to form the most famous and celebrated fourth line in NHL history.

11. Steve Thomas-Pierre Turgeon-Derek King (Islanders): When I recently ranked the top teams in NY/NJ hockey history, I did a disservice to the 1992-93 Islanders by omitting them from the list. That was an exciting team filled with personality that shocked the omnipotent, two-time defending champion Penguins in the second round despite Turgeon’s absence. (See: Hunter, Dale, thuggery.) Turgeon recorded 58 goals and 132 points, King scored 38 goals and Stumpy Thomas chipped in with 37.

10. Patrik Elias-Scott Gomez-Brian Gionta (Devils): The EGG Line. Seriously, with all of the big-time players who have come through New Jersey, it is the Gionta who holds the single-season franchise record with 48 goals he established in 2005-06 with breakdown, puck-transporting center Gomez at about the height of his powers and the redoubtable Elias (who missed the season’s first half recovering from hepatitis) patrolling the left side.

9. Brendan Shanahan-Patrik Sundstrom-John MacLean (Devils): Sundstrom, compromised and ultimately forced to retire because of back issues, is the best Devils player you may know — intelligent, skilled and played both ends with equal elan. MacLean, whose No. 15 should be raised to the top of the Rock, was a goal-scoring machine before he ripped up his knee, and Shanahan was just beginning to emerge as one of the great power wingers of all time with his sophomore 1988-89, 50-point production.

8. Lynn Patrick-Phil Watson-Bryan Hextall (Rangers): The engine that drove the Blueshirts to the Stanley Cup in, ah, what was that year again? Oh, right, 1940, the year that lasted more than a half-century of a lifetime.

7. Don Maloney-Phil Esposito-Don Murdoch (Rangers): The Godfather Line. Maloney was a rookie who worked the corners and could sprinkle more than the odd goal or two and Esposito was fully in his element wearing the Blueshirt while scoring 42 goals. They were joined midway through the season by the sniper Murdoch, who’d been suspended for the first 40 games for a cocaine-related matter. This was the driving offensive force behind the run to the Cup final.

6. Adam Graves-Mark Messier-Alex Kovalev (Rangers): Conjure the vision of a 52-goal scorer riding shotgun for Messier. That’s what you had with Graves on The Captain’s left side. And then, on the right, was the mercurial and gifted Kovalev, whose four-on-four goal late in the second period of the We’ll Win Tonight Game 6 broke the ice and set it up for Messier’s third-period hat trick. This line simply imposed its will on opponents, one after another. By the way, this was apparently 1994 Week on MSG, the year that will last a lifetime.

5. John Tonelli-Brent Sutter-Mike Bossy (Islanders): This was the line that was formed for Team Canada in the 1984 Canada Cup after Trottier had decided to play for Team USA and became a force when kept intact for most of the ensuing season. It could have been called the Century Line, which I am quite sure it was not, when all three cracked the 100-point circle, with Bossy in at 117 (58-59), Sutter in at 102 (42-60) and Tonelli in at 100 even (42-58).

4. Bun Cook-Frank Boucher-Bill Cook (Rangers): The Bread Line. We are talking Rangers royalty here, the three Hall of Famers forming a perfect union that led the Blueshirts to the Stanley Cup in 1928 and 1933. Boucher led the league in assists three times while Bill Cook paced the NHL in goal-scoring twice.

3. Patrik Elias-Jason Arnott-Petr Sykora (Devils): The A Line of 1999-2000 and 2000-01 was as flashy, productive, effective, explosive and charismatic as any NHL unit of the last, oh, I don’t know, 100 years? Honestly, do you want to match with Steve Shutt-Jacques Lemaire-Guy Lafleur? Be my guest. Want to go with Jari Kurri-Wayne Gretzky-Esa Tikkanen? After you. The A Line’s natural chemistry was a sight to behold. Its shocking lack of longevity — Arnott was gone at the 2002 deadline and Sykora followed in the offseason — doesn’t dim either the memory or appreciation of this comet that streaked across the sky.

2. Clark Gillies-Bryan Trottier-Mike Bossy (Islanders): The Trio Grande comprised of interlocking Hall of Famers who combined to create majesty and domination. What’s interesting is that Al Arbour often shifted Gillies off the unit following the first Cup in 1980. Bob Bourne moved on up to fill that spot while Gillies skated primarily with Butch Goring and Duane Sutter.

1. Vic Hadfield-Jean Ratelle-Rod Gilbert (Rangers): The GAG Line then, the GAG Line now, the GAG Line forever, united at the top of the Garden, united in history. Had Ratelle not suffered that broken ankle in Game 63 of 1971-72, chances are good that all three would have scored 50 or more goals. Instead, it was Hadfield with 50, Ratelle with 46 and Gilbert, who scored only four goals after his center left the lineup, with a final tally of 43. Electric and elegant, A-Number 1, king of the hill.