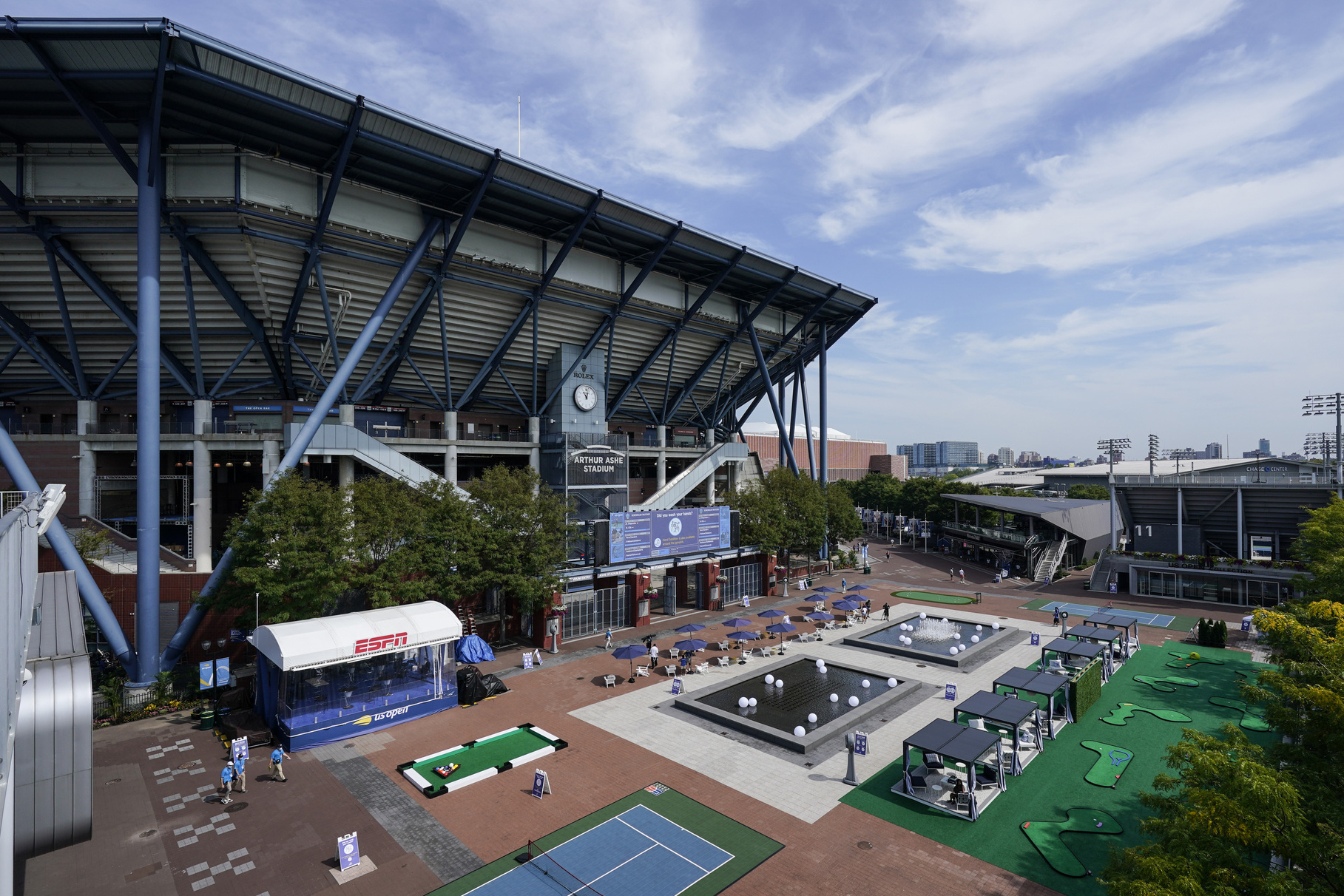 The U.S. Open players are stuck in a Long Island/Queens bubble and not permitted to visit either Jones Beach or Rockaway Beach.

But they have full clearance to lay out on Ashe Beach.

In an attempt to spice up the players’ visit to the USTA National Tennis Center grounds in Flushing during the fan-less Open, Ashe Beach has been created as a recreational oasis.

The makeshift area is situated in front of Ashe Stadium by the popular fountains at which patrons normally congregate to either eat, socialize or watch the giant TV screen hanging outside the 24,000-seat venue.

The South Plaza area has been transformed with white Adirondack chairs, umbrellas, bungalow canopies, beach balls floating in the fountain and an array of recreational games.

According to a USTA source, the primary reason to set up Ashe Beach is to motivate players to stay outside while on site during a COVID-19 pandemic, a disease considered by scientists a lot more dangerous when indoors.

The Western & Southern Open, a U.S. Open tune-up normally staged in suburban Cincinnati, is being played at Flushing Meadows this week. The Grand Slam jewel is scheduled to begin Monday. Both events are absent fans, turning the grounds into, as Novak Djokovic said Tuesday, “a ghost town.’’

“We wanted to give the players as many areas as we could to spread out while they’re on site at the tennis center,’’ U.S. Open tournament director Stacey Allaster told The Post. “First and foremost to keep them safe, along with our universal masking and social distancing policies. But also to help them feel comfortable. The South Plaza was the natural space in which we could do that, where they can relax or take part in a number of fun activities with the added safety of being outdoors.”

Teen sensation Coco Gauff was spotted coming from Ashe Beach on Tuesday after her practice session. During Saturday’s media day for the Western & Southern Open, Gauff admitted she’s enjoyed “sitting outside’’ in the sun.

But the beach crowds have been smaller than hoped.

“I think the intentions are good,’’ Britain’s Johanna Konta said. “Obviously it’s better for us to be in open spaces. The trickiness is the weather. It’s very hot. So I think players, they are not going to be looking to sunning themselves before they go on court or after. We spend quite a bit of time in the sun playing and training, so once we finish, I think everyone is just looking to get out of the sun and also get off site. I think that’s probably why it’s been quite quiet.”

Konta said Ashe Beach was busier last week when players were prepping for the Western & Southern Open before the real matches commenced.

“I have given a go at cornhole and the little putt-putt golf thing,’’ Konta said. “I tried to shoot some hoops. That didn’t go very well. Players are also enjoying the games that are there.’’

The players have limited entertainment options. They are forced to stay at the Long Island Marriott by the Nassau Coliseum and are mandated to take socially distanced buses/vans to the tennis facility in masks. The players must walk around the facility masked.

While the hotel has set up game rooms and eating areas, side trips to Manhattan are banned. Players were allowed to rent houses, but needed to spend $60,000 for security to assure they followed the bubble guidelines of sticking to their house and the USTA National Tennis Center.

Djokovic, who contracted COVID-19 in June, is one of the “very limited” players who spent the money for the house — in New Jersey, according to a source. That’s why Djokovic appreciates the USTA’s effort with Ashe Beach.

“I saw that some of the players played some hoops and some golf,’’ Djokovic said. “It’s good that there are activities outdoors for players that allows all of us to spend relaxing social time off the courts, as well, because we can’t really go anywhere except the hotel — or whoever stays in a house — and site. It is how it is, and potentially you can stay here for a month. So yeah, it’s great. It’s great that there are some activities out there.”