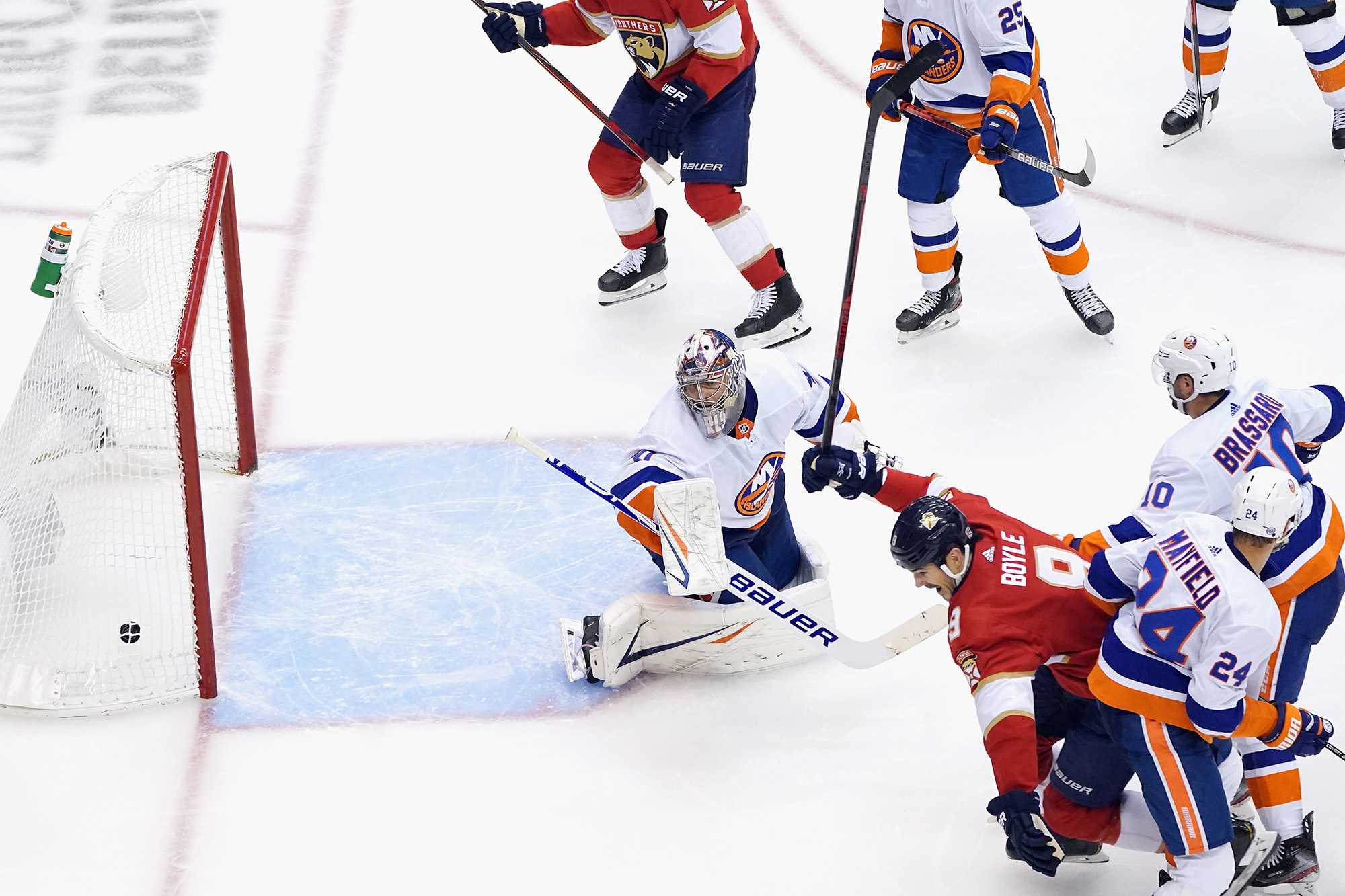 The Islanders left their brooms in New York.

With a 3-2 loss in Game 3, the Islanders failed to complete the best-of-five series sweep over the Florida Panthers on Wednesday afternoon at Scotiabank Arena in Toronto. A costly third-period penalty on Isles goaltender Semyon Varlamov opened the floodgates for the Panthers, who registered two third-period goals to keep their season alive after dropping Games 1 and 2.

Entering the third period tied 1-1, Varlamov took an early delay-of-game penalty for mishandling the puck outside of the crease and Panthers forward Mike Hoffman made it count with a one-timer from right circle to take the lead 41 seconds into the final 20 minutes.

Just over two minutes later, Brian Boyle buried the puck from the slot to further suppress the Islanders’ momentum. The Panthers’ quick two goals shocked the Islanders right out of the rhythm they’ve seemingly kept since their exhibition win over the Rangers last week.

The Islanders pulled Varlamov for an extra skater with 2:37 left in regulation and Brock Nelson capitalized, sending a centering pass in front of Panthers goaltender Sergei Bobrovsky that deflected in off a Panthers skater. But it wasn’t enough.

It was the first period of the entire series that the Islanders looked off their game. Varlamov, who turned aside 19 of the 22 shots he faced Wednesday, will surely look to have a short-term memory with Game 4 on deck.

The desperation was seeping from the Panthers early, as they dialed up the physicality and intensity. But the Islanders remained steady, like they have all series long, bearing down and leaning on their defensive prowess to escape the first with the game still scoreless.

Bobrovsky looked like a two-time Vezina Trophy winner as he made big-time stops on a breakaway from Jordan Eberle and an end-of-the-period frenzy from Nelson and Anthony Beauvillier.

Mathew Barzal had his best opportunity of the series early in the second, taking a hard shot on a feed from Anders Lee before Panthers defenseman McKenzie Weegar got his body in front of it. The Islanders were then deflated by a too-many-men call that led to an Eric Haula power-play goal at 4:02 of the second to give Florida a 1-0 lead.

Not too long after, Ryan Pulock rung the post with a shot from the top of the zone that ignited a surge of dangerous plays for the Islanders. Maintaining puck possession in the Panthers’ zone for nearly two minutes, shots from Nelson, Beauvillier, Nick Leddy and Matt Martin were either blocked or saved by Bobrovsky.

A tremendous effort from Beauvillier deep in the Panthers’ zone paid off as he connected with a crashing JG Pageau for the game-tying tally at 16:26 of the second.

The Panthers spoiled their own power play for the second time late in the second after Aleksander Barkov had no choice but to hook Cal Clutterbuck, who managed to get the puck all alone in front of Bobrovsky while on the penalty kill from a Derick Brassard boarding penalty.