An Alabama girl was beaten with a pole, stabbed and left in the woods by four teen attackers – who then later came back and threw her in a river, where she was left to drown, a detective testified during a hearing Tuesday.

The shocking details were revealed during the preliminary hearing in Montgomery Court for Ta’Niya Merriweather, Erin Taylor and Tyeshia Whisenant, three 16-year-old girls charged as adults in the death of Lesley Luna Pantaleon, 17.

The fourth attacker, a boy present during the alleged beating, had a knife on him, said Montgomery Police Detective Ashley Brown. Police and prosecutors are not disclosing details about the boy, reported the Montgomery Advertiser.

The three girls are charged with capital murder, as they’re accused of intending to kill Pantaleon during a first-degree robbery. Prosecutors say they robbed her of her cellphone and truck. 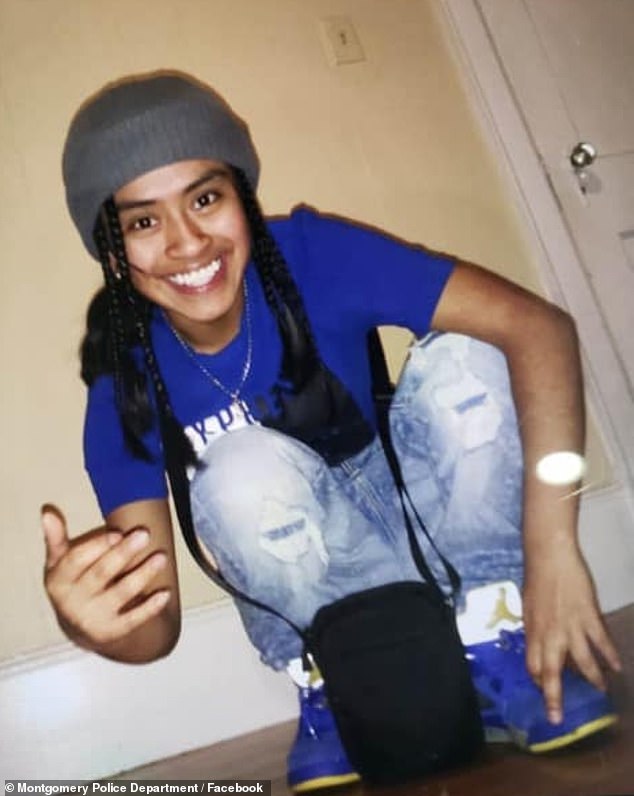 Lesley Luna Pantaleon, 17, (pictured) was reported missing by her parents June 24, the last day they would see her alive. Three 16-year-old girls, Ta’Niya Merriweather, Erin Taylor and Tyeshia Whisenant, are charged with capital murder in connection to her death

A conviction for capital murder in Alabama can carry the death penalty, but the U.S. Supreme Court has banned the execution of those who were under 18 when they committed capital crimes.

That day she fought her alleged attacker Whisenant at her apartment, Brown said.

What Brown pieced together was a tale that began with an accusation of the theft of a gun and ended with the still-alive Pantaleon being tossed into a river. 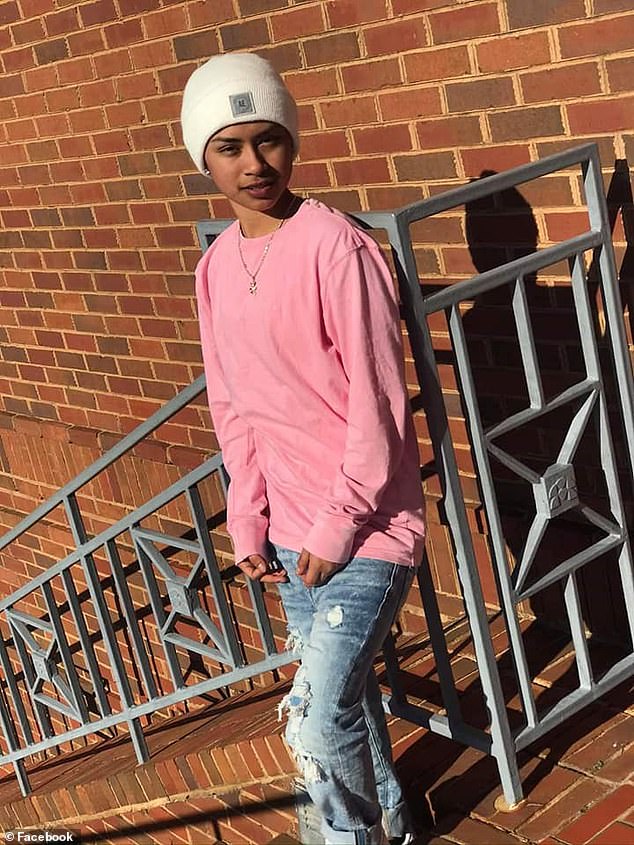 On June 24 Pantaleon (pictured) drove her Chevy Trailblazer to the home of Whisenant, which she believed had some connection to a gun she thought was stolen from her days prior

Pantaleon had heard that Whisenant’s home had something to do with a gun that was stolen from her a few days prior, and she ‘put out a hit’ on the home, one attorney said at the preliminary hearing.

On the night of June 24 Pantaleon went to the apartment in West Montgomery to retrieve the firearm. Whisenant and Pantaleon allegedly fought.

Then the three defendants, the boy, and Pantaleon got into her Trailblazer. Taylor drove.

Whisenant and the boy fought Pantaleon in the backseat, according to testimony. Taylor pulled over to a wooded roadside area, where there was a metal pole from a gate. 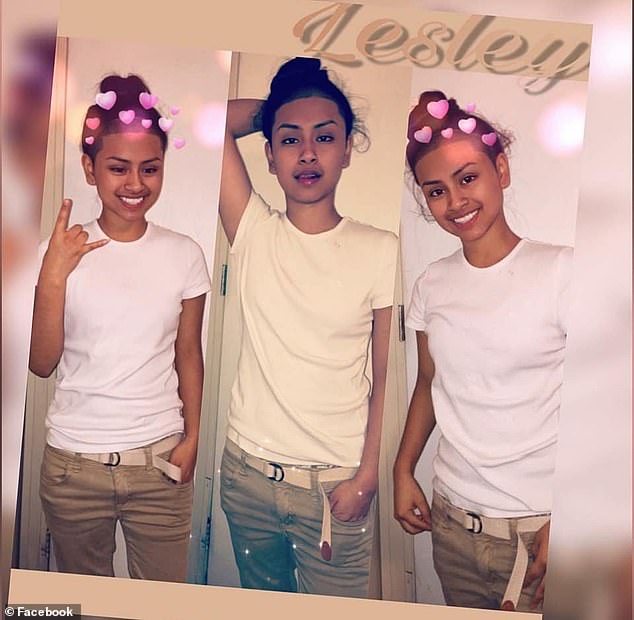 Pantaleon fought with Whisenant at her home the night of June 24. Then Whisenant, the two other defendants, a boy, and Pantaleon went for a drive in Pantaleon’s Trailblazer, where the fighting allegedly continued

Pantaleon was beaten with the pole and stabbed with a knife. The defendants had claimed the boy had a knife on him that night.

The four left Pantaleon on the roadside, stabbed and beaten.

They returned to Whisenant’s apartment and woke a fourth girl, and allegedly told her the details of the beatdown and said they’d bring her to see Pantaleon’s body.

The four, along with the just-awoken girl, returned in their alleged victim’s Trailblazer to the roadside attack site.

Whisenant said the injured girl ‘needed to be taken care of,’ others allegedly told police during interviews.

They grabbed Pantaleon and hauled her into the SUV – along with the pole.

‘They take her on a long, bumpy road for a couple of minutes, get to a creek and river area, then [Whisenant and the boy] threw her in the river,’ Brown testified, according to the Advertiser.

‘The pole was also thrown in the river,’ said Brown. ‘According to Tyeshia, it appeared the victim was trying to swim.’

Then the group of five drove to a McDonald’s, where they had smoothies at 6 a.m. on June 25, according to video surveillance and a timestamped receipt.

On July 4 police responded to a tip about a possible body in the area of Catoma Creek.

The skeletal remains they found there were later identified as the body of Lesley Luna Pantaleon.

There was too much damage to Pantaleon’s body, including her face, for an ongoing autopsy to determine her cause of death, Brown testified.

She said Tuesday that Pantaleon’s cellphone records helped link Taylor, and then Whisenant, to the girl’s death. 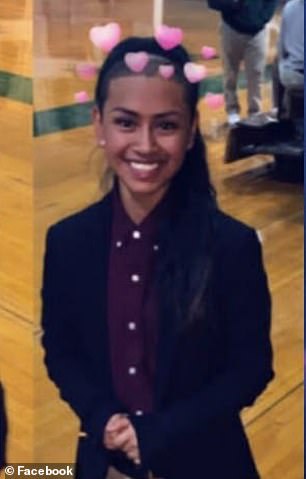 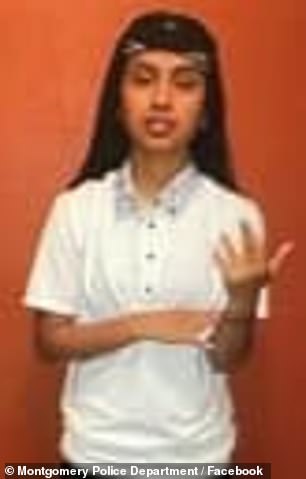 After Taylor, who was driving, pulled over to a wooded roadside area, Pantaleon was beaten with a metal gate pole and stabbed. They left her there, and awoke a fourth girl back at Whisenant’s apartment

Whisenant and Taylor have accused each other of beating Pantaleon with a pole, Brown said. Merriweather is accused of moving the beaten girl back into her SUV.

The three girls are currently held without bond, which is allowed for capital murder suspects in Alabama. Attorneys for the girls have made bond requests for their three detained clients.

Lawyers for all three girls argued Tuesday that the case is charged wrongly – they say it was not a robbery, and therefore the alleged killing does not qualify as capital murder.

Prosecutor Scott Green argued that Taylor used Pantaleon’s phone as if it were hers after the alleged killing.

‘This phone is evidence in a murder. She was caught with that phone,’ Green said, reported the Advertiser.

‘They took her stuff and they took her and they beat her more and threw her in the creek to drown her or for her to die from her injuries. She would have been better off in a car with four monsters than with these people,’ Green said later in the hearing.

Judge Monet Gaines said she was skeptical of Green’s reasoning that robbery was a motive. ‘I do not believe these defendants at this age have the same mindset you’re saying they did,’ she said.

The judge said she would rule later on the bond requests and whether the case would remain a capital murder.

New York Governor Andrew Cuomo on Thursday pulled out a mock vaccine at his press conference to show the complex process of administering...
Read more
U.S

The Queen wants her children and grandchildren to 'enjoy Christmas with their other loved-ones' and 'not feel torn' as she prepares for a...
Read more
U.S

New York Governor Andrew Cuomo on Thursday pulled out a mock vaccine at his press conference to show the complex process of administering...
Read more

Cuomo presents a mock vaccine to show the complex process of...