Microscopic fibres from blue denim jeans have been found in the Arctic for the first time, a new study claims.

Scientists discovered indigo denim microfibers in the North American waters, which are shed during laundering, enter waterways and can be ingested by fish.

Indigo denim fibres also make up almost a quarter of microfibres in the Great Lakes in and around the Canada-US border and  a fifth of clothing fragments in the the Canadian Arctic Archipelago, the experts reveal.

Their experiments also showed about 50,000 microscopic denim fragments are shed in a single domestic wash, despite its reputation as a robust textile.

One practical solution to the problem would be for consumers to wash their jeans and other textiles more infrequently.

A previous study also found that clothing may be more prone to shredding microscopic plastic fibres into our waterways if it has been cut during manufacturing with scissors as opposed to lasers. 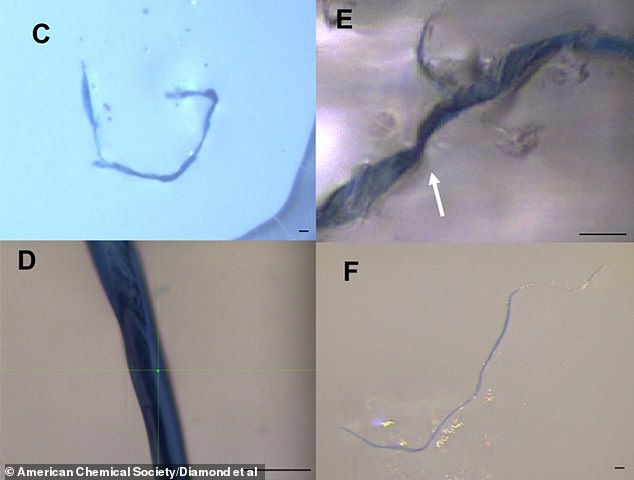 The study shows that one of the most ubiquitous and versatile garments is leaving traces in some of the most pristine regions of the world.

In the past century, the popularity of blue jeans has grown rapidly, with a global market value forecast to reach US$85 billion by 2025, meaning denim pollution could get worse.

‘At any moment, approximately half of the world’s population is wearing blue jeans and other denim garments,’ they say in their research paper, published in Environmental Science & Technology Letters.

‘Here we show, for the first time, that blue jeans, the world’s most popular single garment, have a widespread geographic footprint in the form of microfibers in aquatic environments from temperate to Arctic regions.

‘In fact, these “natural” microfibers are often more abundant than synthetic microfibers in environmental samples.’

Despite the manufacturers’ recommendation of washing jeans monthly, the average Canadian washes their jeans after wearing a pair twice, according to the researchers. 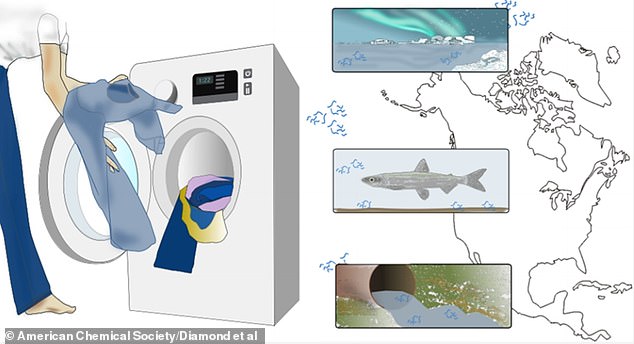 Despite the manufacturers’ recommendation of monthly washing, the average Canadian washes their jeans after wearing a pair twice

Although most microfibers are removed by wastewater treatment plants, some can still enter the environment through wastewater discharge, known as effluent.

Researchers therefore wondered whether blue jeans were a major source of human-made cellulose microfibers to the aquatic environment.

The team from the University of Toronto used microscopy and raman spectroscopy to identify and count indigo denim microfibers in various water samples collected in Canada. 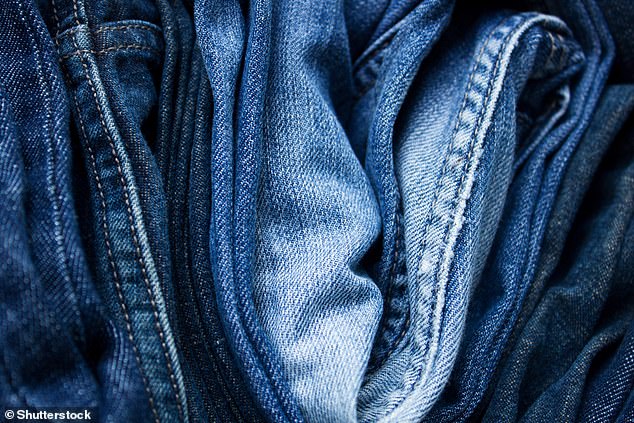 Denim blue jeans are iconic as the most ubiquitous and versatile garment in the world and in the past century their popularity has grown rapidly, the experts say

Indigo denim made up 23 per cent of all microfibres in sediments from the Great Lakes, they found.

This figure was 20 per cent for microfibres in the Canadian Arctic Archipelago and 12 per cent in a variety of shallow suburban lakes near Toronto.

The team also detected a single denim microfibre in the digestive tract of a type of fish called rainbow smelt, taken from the Great Lake.

Based on the levels of microfibers found in wastewater effluent, the researchers estimate that the wastewater treatment plants in the study discharged about 1 billion indigo denim microfibers per day. 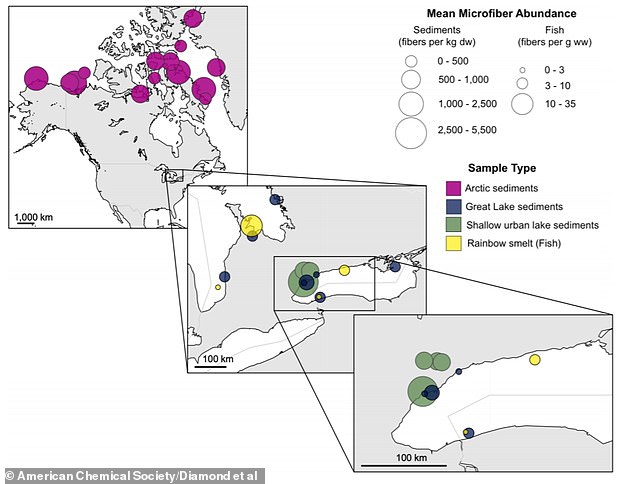 Distribution of average microfiber concentrations from sediment samples, including those collected from the Canadian Arctic Archipelago, Great Lakes, and shallow suburban lakes and rainbow smelt

In laundering experiments, a single pair of used jeans could release about 50,000 microfibers per wash cycle.

The experts don’t know the effects that the microfibers have on aquatic life, but a practical way to reduce denim microfiber pollution would be for consumers to wash their jeans less frequently.

Microplastics, small pieces of plastic and fibres less than five millimetres in length, can come from plastic bottles, packaging, cosmetics and micro-beads in toiletries.

Less known about are microfibres, from textiles and clothing, which are also small enough to pass through the filter systems in domestic waste water treatment plants.

The tiny plastic fibres, thinner than a human hair, are eaten by plankton and shellfish when they reach the ocean and can ultimately be consumed by humans.

A prior study by University of Exeter found crabs given food contaminated with microfibres ate less food overall, stunting their growth.

One theory to combat the problem is the development of washing machines that use pressurised carbon dioxide instead of water.

University of Exeter scientists also recently found microplastics and man-made fibres from disposable face masks in the guts of sharks off the Cornish coast.

More than two thirds of four species of seabed-dwelling sharks contained microplastics and other man-made fibres in their stomachs, they found.

Synthetic cellulose, one of the fibres that was collected, is widely used to make clothes and disposable hygiene products such as facemasks.

Widely-available face masks feature a layer of non-woven bonded fabric – commonly made of polypropylene – which gives them a long afterlife when they are discarded and can end up in landfill or oceans.

WHAT CAN MICROPLASTICS DO TO THE HUMAN BODY IF THEY END UP IN OUR FOOD SUPPLY?

According to an article published in the International Journal of Environmental Research and Public Health, our understanding of the potential human health effects from exposure to microplastics ‘constitutes major knowledge gaps.’

Humans can be exposed to plastic particles via consumption of seafood and terrestrial food products, drinking water and via the air.

However, the level of human exposure, chronic toxic effect concentrations and underlying mechanisms by which microplastics elicit effects are still not well understood enough in order to make a full assessment of the risks to humans.

According to Rachel Adams, a senior lecturer in Biomedical Science at Cardiff Metropolitan University, ingesting microplastics could cause a number of potentially harmful effects, such as: