Touching moment Washington State waitress gets a $1,000 tip from anonymous Good Samaritan just before restaurants shut down indoor dining due to COVID-19 restrictions

By Ariel Zilber For Dailymail.com and Associated Press 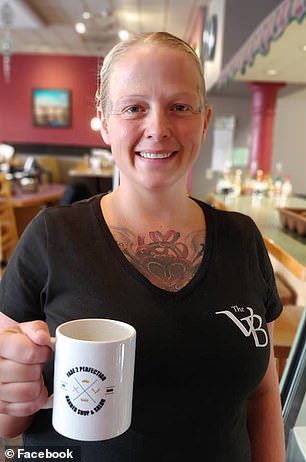 Cassy Palmer, a server at the Village Bistro in Kennewick, Washington, received a $1,000 tip from anonymous Good Samaritans on Sunday

A waitress in Washington State was shocked to receive a surprise $1,000 tip at a restaurant on Sunday.

The moving moment which was posted to Facebook shows Cassy Palmer, a server at the Village Bistro in Kennewick, tend to customers at a table.

The customers had arranged eight red Solo cups upside down, which made it appear as if they were about to play beer pong, Palmer said.

But when the customers asked her to look underneath the cups, Palmer was stunned to find $1,000 in cash.

The cash was dispersed so that dollar bills could be found under each cup.

‘That’s so nice,’ Palmer says in the video. ‘You guys did not have to do that.’

The heartwarming gesture came from an anonymous group of local businesswomen, according to KEPR-TV.

Palmer, who is known affectionately by her co-workers as ‘sweet and sassy Cassy,’ is a recovering former addict who has experienced homelessness.

The tip was a way to support her before Washington State’s newly reimposed coronavirus lockdown measures which restrict indoor dining go into effect. 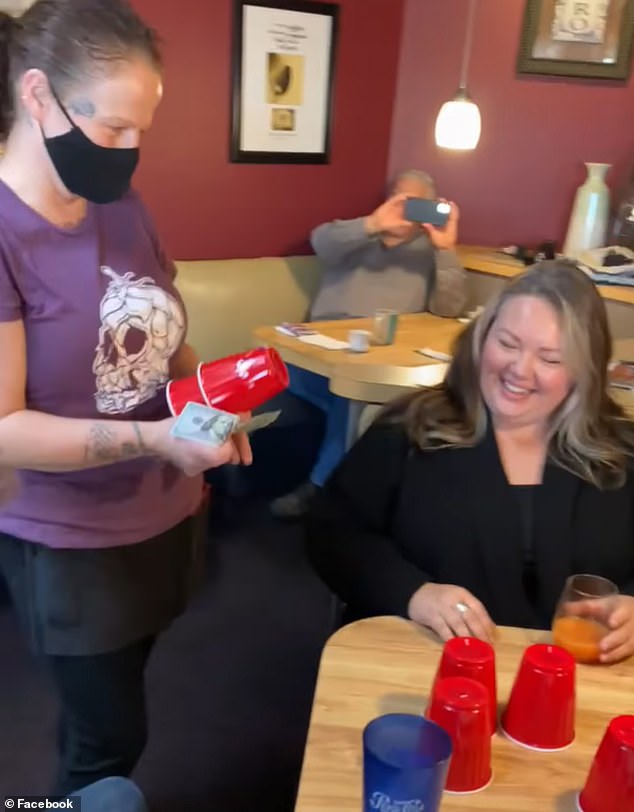 Palmer was serving a table where the diners placed red cups upside down, making it appear as if they were playing beer pong 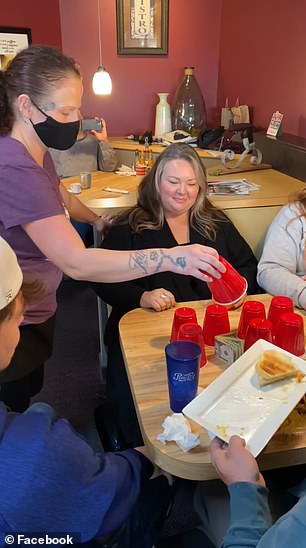 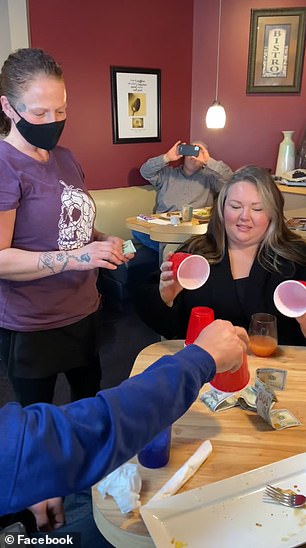 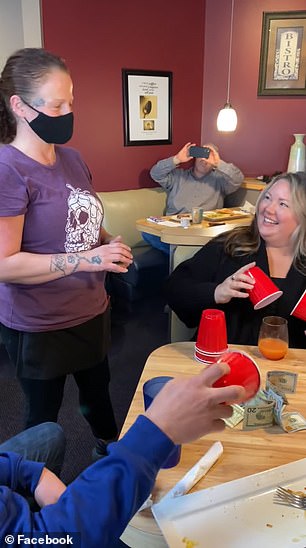 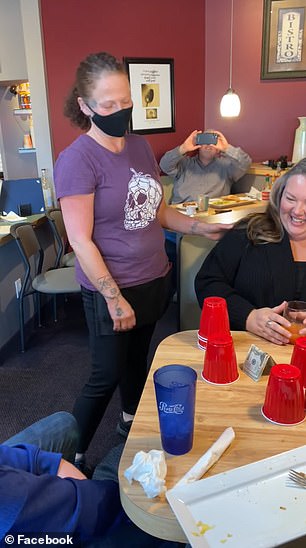 Palmer was shocked to see that she was being given a special $1,000 tip 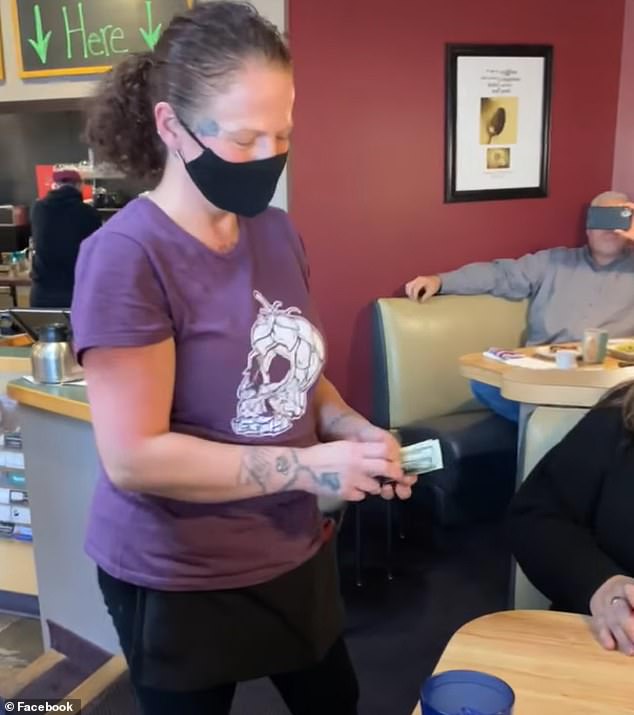 ‘It has been a rollercoaster, but this has been the best place to work at because of the community and the customers and everybody is just so great it’s like family here,’ Palmer said.

Governor Jay Insley on Sunday announced new restrictions on businesses and social gatherings for the next four weeks as the state continues to combat a rising number of coronavirus cases.

Starting at 11:59 p.m. Monday, a host of businesses were required to close their indoor services, including fitness facilities and gyms, bowling centers, movie theaters, museums, zoos and aquariums.

Retail stores — including grocery stores — must limit their indoor capacity to 25 percent.

Also starting at that time, indoor social gatherings with people from more than one household are also prohibited unless attendees have either quarantined for 14 days before the gathering or tested negative for COVID-19 and quarantined for seven days. 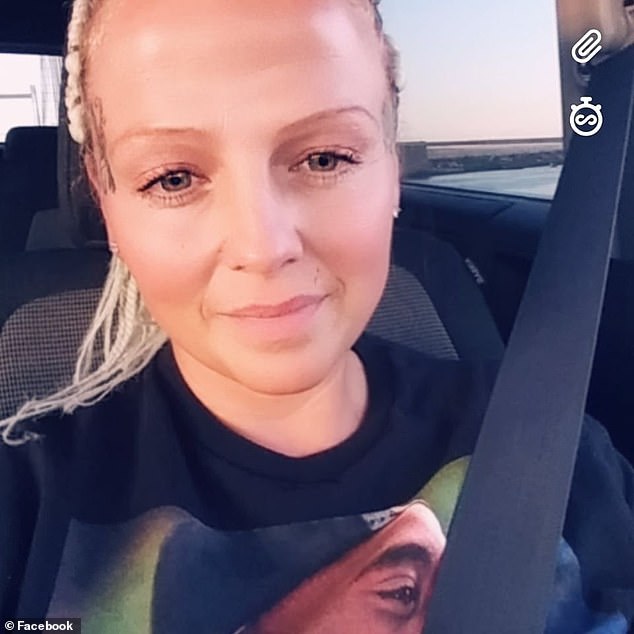 Palmer, who has been waitressing at the restaurant for the past two years, is a recovering alcoholic

There’s no enforcement mechanism for indoor get-togethers, but Inslee said he hopes people will follow the order.

Beginning on Wednesday, restaurants and bars will be limited to to-go service and outdoor dining with tables seating no more than five people.

At a Sunday morning news conference, Inslee warned that the state is facing a third wave of the virus that is ‘trending to be more dangerous than any we have seen before.’

‘Inaction here is not an option,’ he said.

Facebook
Twitter
Pinterest
WhatsApp
Previous articleLionel Messi 'tired of always being the problem for everything' at Barcelona
Next articleWhatsApp will stop working on Windows 10 web browser, are YOU affected?

A search is underway in New York City to find a doctor who ‘vanished without a trace’ more than a week ago during...
Read more
U.S

UK Sport faces anxious wait to discover if it has been...