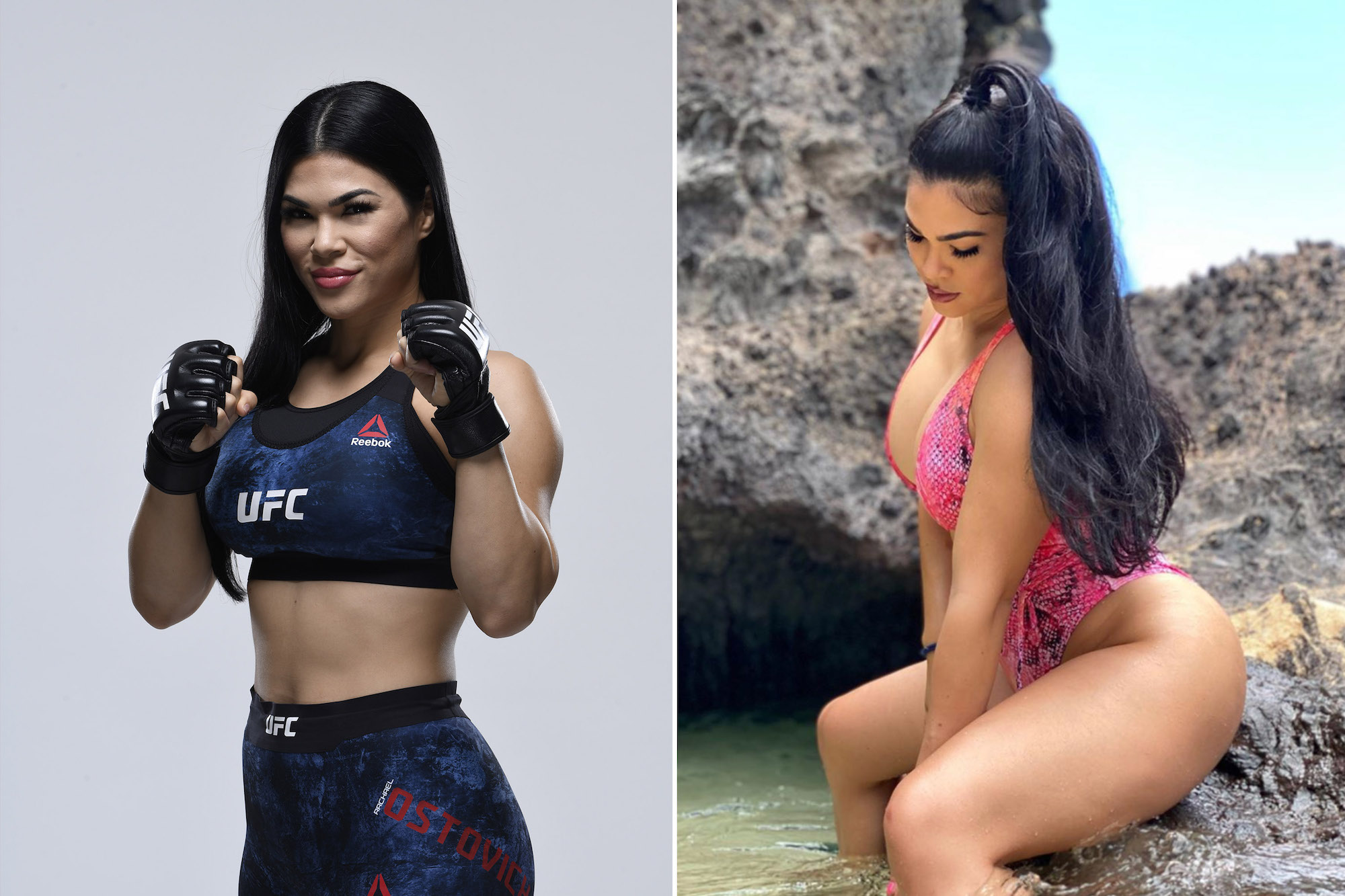 Since making her debut in the UFC in Dec. 2017, glamorous Rachael Ostovich has won scores of male admirers, and it’s easy to see why.

The Hawaiian-born MMA star, the poster girl for the sport, isn’t afraid to show off her stunning bikini bod on Instagram to her near 700,000 followers.

However, fans will have to wait a year to see her in action, after she was banned from the sport for testing positive to banned substances, ostarine and GW1516.

It’s the latest setback in what has been a controversial career for the 29-year-old flyweight.

In 2018, Ostovich’s ex-husband attempted to murder her, breaking her eye-socket in a vicious attack.

But months later, she brushed her injuries aside to fight Paige VanZant at UFC Fight Night. Here’s her story.

On Nov. 18, 2018 Ostovich and her ex-husband Arnold Berdon, also a MMA fighter, got into an altercation at their Honolulu home.

She claimed in court papers that Berdon repeatedly punched her in the head, face and ribs in a brutal beating.

In a chilling nine-minute video that was shot by a witness, the attacker can be heard saying: “I’m going to murder you. I’m going to f–king murder you” in between Ostovich’s cries for help.

She suffered a broken eye socket in the attack, and managed to escape from a balcony.

“After a night out with family, (Arnold Berdon) punched me repeatedly on the head, face, ribs, making me fall to the ground,” she said in the legal documents. “I gasped for breath and escaped thru [sic] balcony. I coughed up blood, threw up several times. Cracked orbital.”

On May 16, 2019 Berdon was sentenced to a four-year probation in domestic assault.

Ostovich’s divorce decree was filed giving her full custody of their daughter, Ruby.

The incident occurred just months before Ostovich was scheduled to get into the Octagon with the UFC’s rival pin-up Paige VanZant.

They went through with the fight after it was initially canceled.

“I remember being on the hospital bed like still, ‘I need to fight. This is my fight,’” Ostovich said. “I knew it was something I needed to do.”

However, at UFC Fight Night 143 in Brooklyn, Ostovich came up short — losing by a second-round submission.

Still, her opponent was full of awe for her foe, even giving her a kiss after their battle.

VanZant said the fact that Ostovich stepped into the cage to compete was already a “huge triumph and success.”

She has become a favorite amongst UFC’s male fans, who follow her on Instagram and are left hot under the collar by some of her racy posts. And during lockdown, the brawler shared several bikini shots in barely-there swimsuits that showed off her epic figure.

In one post, she even showed off her quirky sense of humor — mocking up a cover for a spoof magazine called ‘Quarantine‘ with her as the cover star.

As part of the faux shoot, Ostovich added a distressed barcode as well as multiple headlines about daily life while under coronavirus lockdown.

She captioned the picture: “Quaranteen Queen.”

Ostovich is truly the bad girl of UFC now.

She has been banned after failing a drug test and testing positive for ostarine, a substance that improves lean muscle mass and physical performance, as well as GW1516 – which enables muscles to use fat rather than carbohydrates as an energy source, often leading to weight loss.

She was due to face Shana Dobson in February but withdrew. It means that we won’t be able to see Ostovich fight until Jan. 3 next year.

Giants’ Joe Judge knows nothing is ‘easy’ about the NFL

MLB playoffs will be another unusual challenge for Yankees