The United States believes it killed seven senior leaders of al-Qaeda in Syria in an airstrike last week as they were meeting near the Turkish border, US Central Command said Monday.

A Central Command spokeswoman, Major Beth Riordan, said the strike was conducted in Idlib, in northwest Syria, on October 22. She did not identify the seven leaders by name.

‘The removal of these AQ-S leaders will disrupt the terrorist organization’s ability to further plot and carryout global attacks threatening U.S. citizens, our partners, and innocent civilians,’ she said.

‘AQ-S takes advantage of the instability in northwest Syria to establish and maintain safe havens to coordinate terrorist activities,’ she added. ‘With our allies and partners, we will continue to target al-Qaeda and other terrorist organizations.’

In total 17 jihadists died in the strike and five civillians were killed, according to the Syrian Observatory for Human Rights. 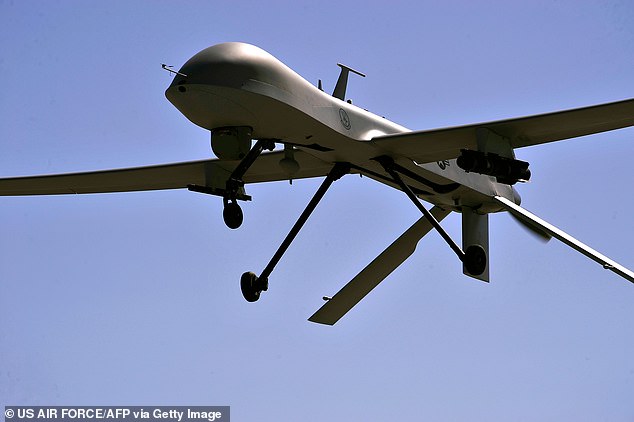 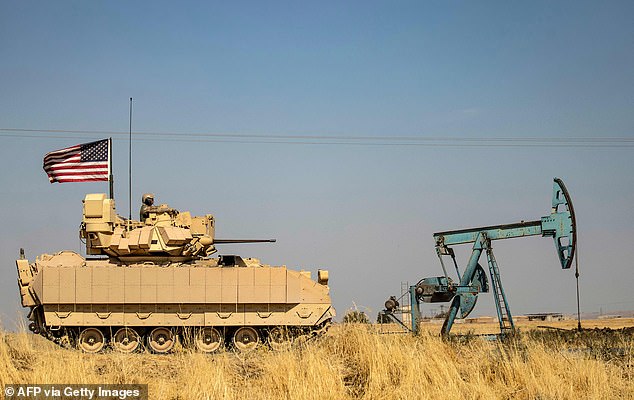 In total 17 jihadists died in the strike. The Syrian Observatory for Human Rights said five civilians were also killed (pictured: A US fighting armoured vehicle takes part in a patrol near the Rumaylan (Rmeilan) oil fields in Syria’s Kurdish-controlled northeastern Hasakeh province)

In her statement, Riordan did not specify the total number of fatalities resulting from the strike.

The British-based Observatory said the strike had been targeting a dinner meeting of jihadists in the village of Jakara in the Salqin area.

The village lies in Syria’s last major rebel bastion of Idlib, which is dominated by the Hayat Tahrir al-Sham group, led by a former al-Qaeda affiliate, and its rebel allies.

Observatory chief Rami Abdel Rahman told Military.com that five non-Syrian jihadists were among those killed, but their nationalities were not immediately known.

‘They had been invited to dinner in a tent on a farm in Jakara,’ he said.

‘It was a meeting of leaders opposed to HTS and who reject the Russia-Turkish deals’ that led to a fragile truce in Idlib, he said. ‘Some were close to Hurras al-Deen.’

The Idlib region is the largest area in Syria not currently under government control. It is home to nearly three million people.

Idlib is being threatened on one side by the Syrian government troops loyal to President Bashar Assad who is backed by Russia and on the other by the Turkish military which is moving more troops into the area.

The US also conducted an airstrike against al-Qaeda in Syria, near Idlib, on October 15.

US military officials said that the drone strike was carried out by the Joint Special Operations Command (JSOC).

Rahman said that a Jordanian and a Yemeni military commander from the al-Qaeda-affiliated Hurras al-Deen group were killed when a missile fired from a drone hit their car. 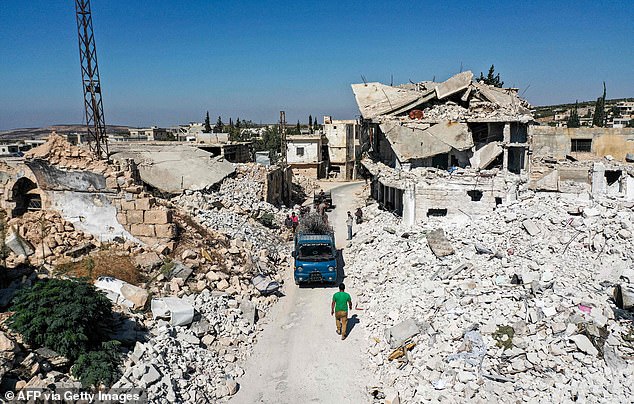 People collect scrap steel rods from the rubble and destruction in the aftermath of aerial bombardment in the town of Ihsim in Syria’s rebel-held northwestern Idlib province, on October 18 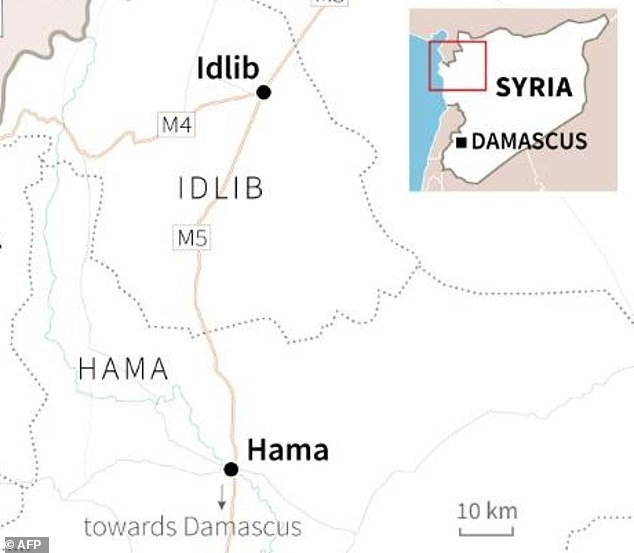 SyriaThe Idlib region is the largest area in Syria not currently under government control. It is home to nearly three million people

On Sunday, Afghanistan claimed it killed a top al-Qaeda propagandist on an FBI most-wanted list during an operation in the country’s east.

The reported death of Husam Abd al-Rauf, also known by the nom de guerre Abu Muhsin al-Masri, follows weeks of violence, including a suicide bombing by the Islamic State group Saturday at an education center near Kabul that killed 24 people.

Details over the raid that led to al-Rauf’s alleged death remained murky hours after Afghanistan’s intelligence service, the National Directorate of Security, claimed on Twitter to have killed him in Ghazni province. It said one of its members was also killed in the operation. T

he agency released a photograph late Sunday afternoon it described as al-Rauf’s corpse, which resembled FBI images of the militant leader.

The Afghan presidential palace issued a statement Sunday saying al-Rauf had been killed and warning it ‘proved that the threat of terrorism and the Taliban’s links to terrorist networks are still in place.’

‘The Taliban should prove to the people, the government of Afghanistan and the international community that they are ending their links with terrorist groups, including al-Qaeda,’ the statement said. They ‘should stop the war and violence and facilitate a dignified and sustainable peace in the country.’

Federal prosecutors in the Southern District of New York filed a warrant for al-Rauf’s arrest in December 2018, accusing him of providing support to a foreign terrorist organization and being part of a conspiracy to kill US citizens.

The FBI put him on the bureau’s ‘Most Wanted Terrorists’ list, which now includes 27 others.

Al-Qaeda did not immediately acknowledge al-Rauf’s reported death. The FBI declined to comment. The U.S. military’s Central Command and NATO did not respond to requests for comment. 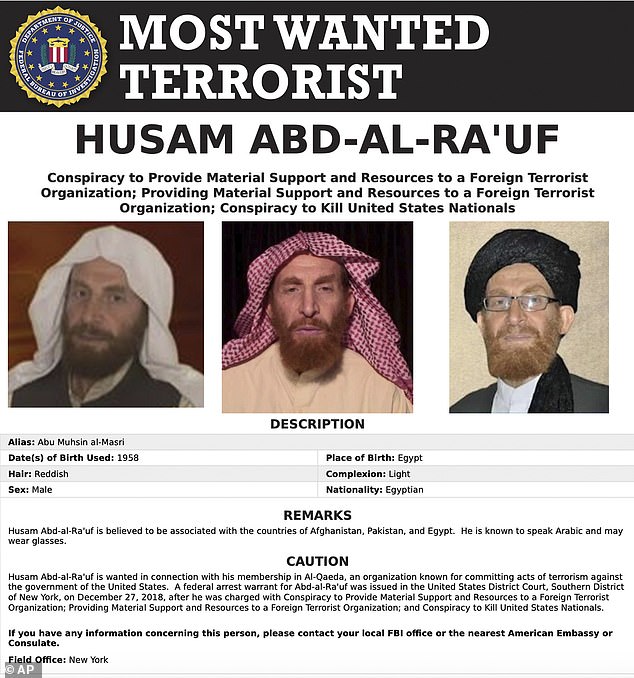 The reported death of Husam Abd al-Rauf, also known by the nom de guerre Abu Muhsin al-Masri, follows weeks of violence, including a suicide bombing by the Islamic State group Saturday at an education center near Kabul that killed 24 people

Back in Idlib, on Monday, Russia was blamed for an airstrike on a training camp in the region that killed more than 50 Turkish-backed militia fighters.

The daytime attack was deemed one of the heaviest blows to the opposition’s strongest groups.

Youssef Hammoud, a spokesman for the Syrian opposition, said the airstrike targeted a military training camp for Faylaq al-Sham. Faylaq al-Sham is the largest Turkish-backed armed group and one of the most disciplined and best trained.

Turkey has long supported Syrian rebel forces and has used many of those fighters to bolster its military campaigns in Libya and Azerbaijan.

The camp, at Jebel al-Dweila, not far from the Turkish border, was hosting training sessions for new recruits, according to a war monitor and another opposition spokesman. Leaders of the camp were among those killed, according to Hammoud. 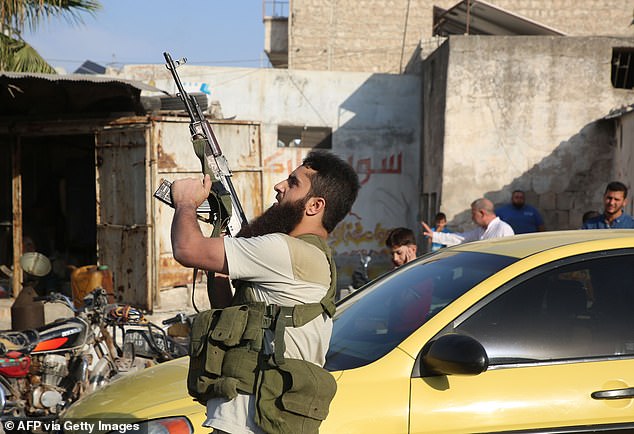 A fighter with the Turkey-backed Faylaq al-Sham rebel faction in Syria shoots in the air during the funeral of 10 of the faction’s fighters in the northwestern city of Idlib, on October 26 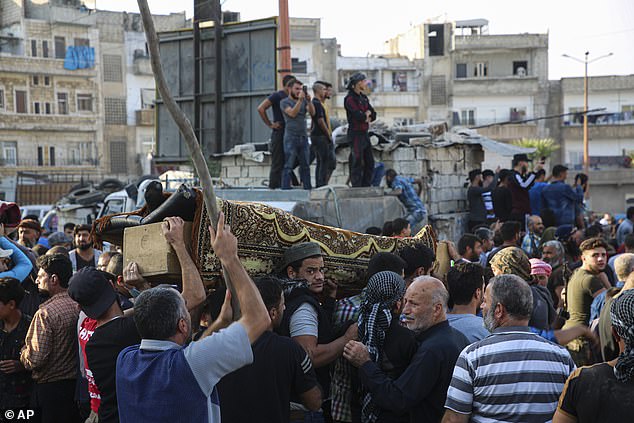 People attend funeral of fighters killed in an airstrike in the town of Idlib, Syria, Monday

Observatory for Human Rights, which monitors the war in Syria, gave a higher toll of 78 fighters dead and nearly 90 wounded. Rescue efforts were still under way, the Observatory said.

‘We, the factions of the National Front for Liberation, will respond to these violations,’ said Naji al-Mustafa, another spokesman for the Turkish-backed fighters, threatening to target government and Russian positions. He called the strike a ‘crime’ by Russia.

After a string of military victories backed by key ally Russia, the Syrian government has regained control of around 70 percent of the country, according to the Observatory.

The war, which broke out after the bloody suppression of anti-government protests in 2011, has killed more than 380,000 people and displaced millions of Syrians from their homes.

New York Governor Andrew Cuomo on Thursday pulled out a mock vaccine at his press conference to show the complex process of administering...
Read more
U.S

New York Governor Andrew Cuomo on Thursday pulled out a mock vaccine at his press conference to show the complex process of administering...
Read more

Cuomo presents a mock vaccine to show the complex process of...