More than meets the eye! Army develops a new drone that can TRANSFORM mid-flight, making it useful for missions that require high-speed flight or hovering in place

Army researchers have designed a new drone that can transform mid-flight, making it capable of both high-speed flight and hovering in place at a target destination.

The drone was a joint effort from the US Army Research Laboratory and engineers Texas A&M, who presented their research at the American Institute of Aeronautics and Astronautics Aviation Forum and Exposition.

The drone transforms by either bending its wings upward or fully extending them depending on the needs of the mission and the types of maneuvers it needs to execute. 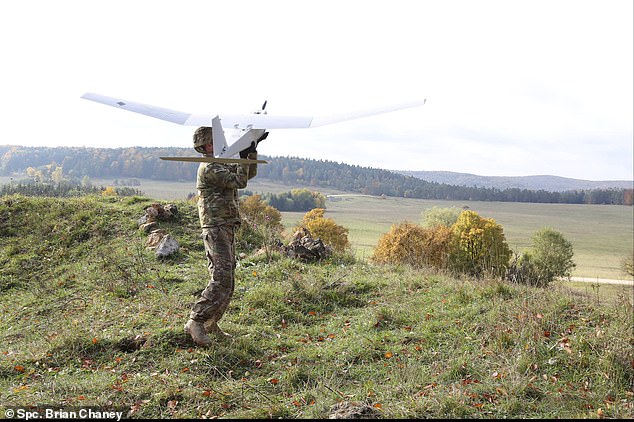 For ‘dash’ segments of missions, which require travel to and from a target, the wings will be folded inward to allow for faster and more efficient travel, while ‘loiter’ phases of a mission will see the wings fully extended for increased stability.

According to Phillips, one of the main challenges was creating a joint capable of bending during transformation but which wouldn’t buckle or bend during flight.

‘If the wing bends too much, then the theoretical benefits of the morphing could be negated and also could lead to control issues and instabilities,’ Phillips said.

Settling on a final design required lots of small iterations that the team was able to test in computer simulations, thanks in part to recent advances in computational power.

The drones wings can fulled extend during ‘loiter’ segments of a mission for added stability, and they can fold inward for ‘dash’ segments that require high-speed flight between locations

In the past, simulating complex fluid dynamics to test a new design feature would require tens of thousands of core processing hours, according to Phillips.

With an updated approach to fluid simulation combined with recent efficiency gains in computer processors, the team was able to cut down the computational ‘cost’ of testing each new design by 80%.

According to Phillips, these advances could be a breakthrough that could make it possible to design new drones that can transform into several different forms, not just two.

‘This research will have a direct impact on the ability to generate vehicles for the future warfighter,’ Phillips said.

‘By reducing the computational cost for fluid-structure interaction analysis, structural optimization of future vertical lift vehicles can be accomplished in a much shorter time-frame.’