The owner of a charter flight company in Virginia is accused of creating fake employees to secure $2.5 million in federal Payroll Protection Program loans intended for COVID relief – and using part of the money to buy a Cessna airplane and a Lexus.

A federal judge on Thursday ordered Didier Kindambu, 48, jailed before trial because the Congo national has two passports, a student pilot’s license and access to three small aircraft.

Kindambu is the owner of Papillon Air, which operates out of Leesburg Executive Airport. He faces a felony charge of bank fraud over the alleged scheme.

A conviction would mean up to 30 years in prison and a $1 million fine. 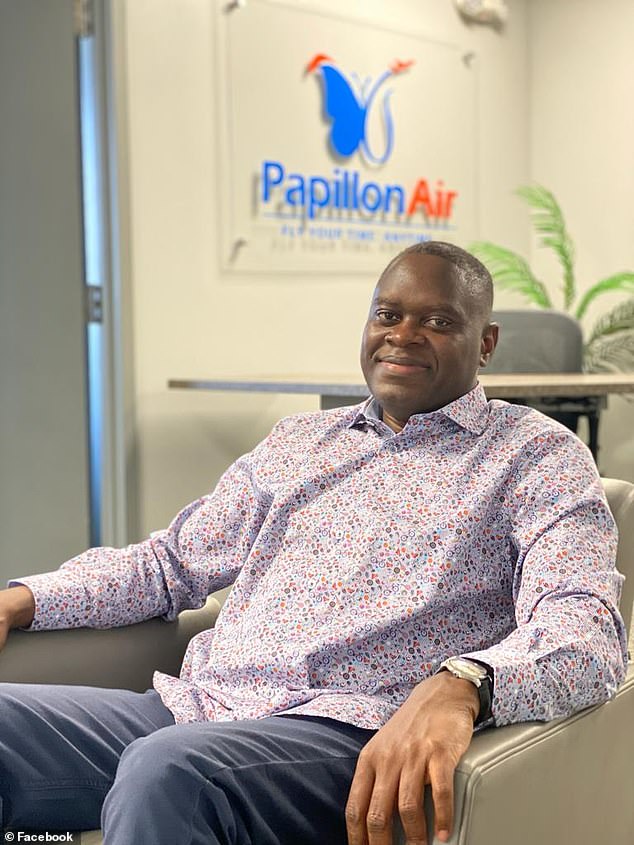 Didier Kindambu, CEO of Papillon Air in Leesburg, Va., is accused of defrauding the federal PPP loan program by inventing ‘fictitious’ employees, according to an IRS affidavit 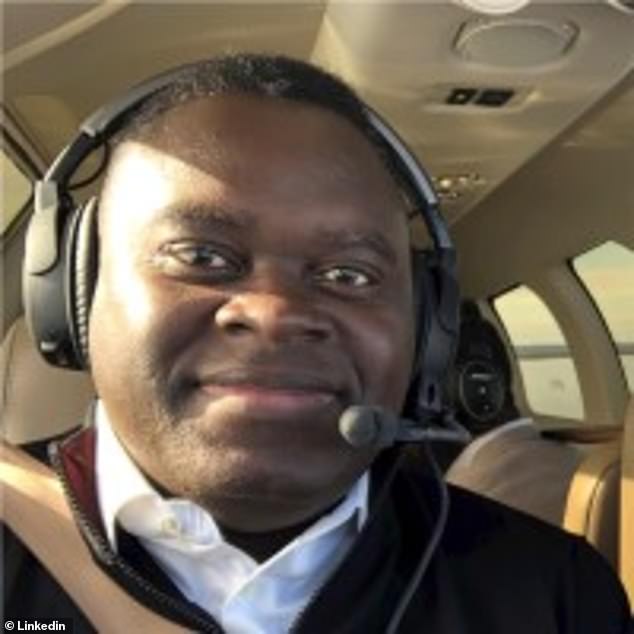 A federal prosecutor argued Thursday that because Kindambu, 48, has a student pilot’s license, two passports, and access to three small planes, he poses a risk of fleeing the country before a trial. A judge agreed and ordered him jailed pre-trial.

An IRS investigator’s report unsealed after Kindambu’s arrest earlier this week revealed the scheme that netted his company $2.5 million in two separate loans via the Payroll Protection Program (PPP), which is intended to help businesses make payroll and and avoid laying off workers during the pandemic.

The loan applications allegedly detailed supposed payroll expenses, tax withholding, and unemployment insurance payments that Kindambu’s companies had made to support a claim that the companies were trying to keep a combined 45 full-time employees on the payroll.

‘There are several indications that these records are false, and that many if not all of the claimed employees are fictitious,’ the IRS investigator’s affidavit reads.

In a PPP loan application to Bank of America Kindambu made April 6 for Papillon Air, he allegedly claimed the company had made over $10,000,000 in payroll and payments to contractors.

Investigators could find roughly only $800,000 in payouts from all accounts associated with the company. 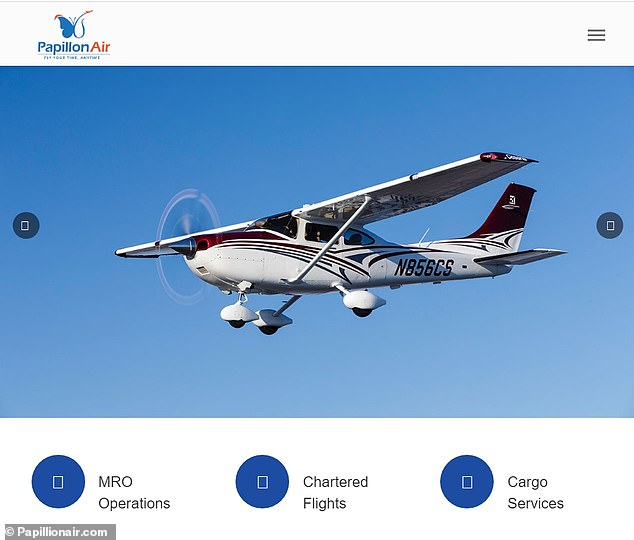 Kindambu’s Papillon Air operates out of Leesburg Executive Airport in Leesburg, Va. The Congo national got $2.5 million in PPP loans supposedly to keep the company aloft, but allegedly used part of the proceeds toward purchases such as a Cessna aircraft and a Lexus

In another April 6 loan application, this one for Papillon Holdings, Kindambu allegedly submitted a spreadsheet that detailed $7 million in payroll expenses from 2019. But the IRS could find only $2.5 million in payouts from accounts tied to that company.

Kindambu also allegedly used the same formula for figuring the tax withholding for each of the employees he was claiming, which the investigator saw as a red flag.

The IRS also alleges Kindambu used some of the PPP money to pay employees whose names didn’t match those on the applications and who were being paid ‘far less’ than the ‘suspected fraudulent’ names submitted with the loan application. 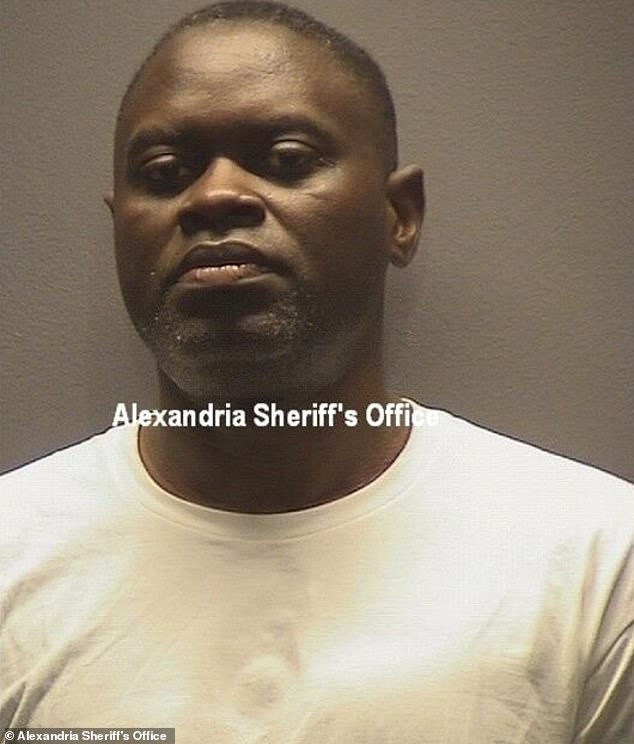 Kindambu’s attorney argued Thursday that his hypertension and diabetes put him at increased risk for contracting COVID while in jail, but a federal judge was unswayed

And the $2.5 million that Kindambu received via the PPP were allegedly used on expenses outside of what the loans were intended for: payroll and operating expenses.

Kindambu, the IRS said, used part of his loans toward purchases of a Lexus automobile and a Cessna 172S single-engine propeller plane.

In a hearing in the Eastern District of Virginia Thursday, a federal prosecutor argued Kindambu could flee the country before his trial because he has access to two single-engine planes and one dual-engine Beechcraft.

His defense attorney, Kevin T. Carroll, said Kindambu would need to make five stops, many in U.S.-friendly countries, in a small craft before reaching Central Africa, where he has ties.

Carroll also said Kindambu also has hypertension and diabetes, putting him at elevated risk if he were to contract COVID-19 while in jail. He argued for home detention and a $1.2 million bond.

Magistrate Judge Michael S. Nachmanoff was unswayed by the COVID concerns and sided with the prosecutor, ordering Kindambu jailed pending a trial.

Some 97 whales and three dolphins died in the stranding, which conservation department staff were alerted to around midday local time on Sunday....
Read more

Tottenham striker Harry Kane was praised for his 'really clever' ability at drawing fouls by Jamie Carragher this week.He was branded 'the most street-wise...
Read more

How to sleep with lower back pain: Strategic pillow positions can lead to a good sleep

The cause of lower back pain can vary from bad posture to awkward sleeping positions. In order to help your body heal, sleep...
Read more

How to sleep with lower back pain: Strategic pillow positions can lead to a good sleep

The cause of lower back pain can vary from bad posture to awkward sleeping positions. In order to help your body heal, sleep...
Read more
Load more

How to sleep with lower back pain: Strategic pillow positions can...