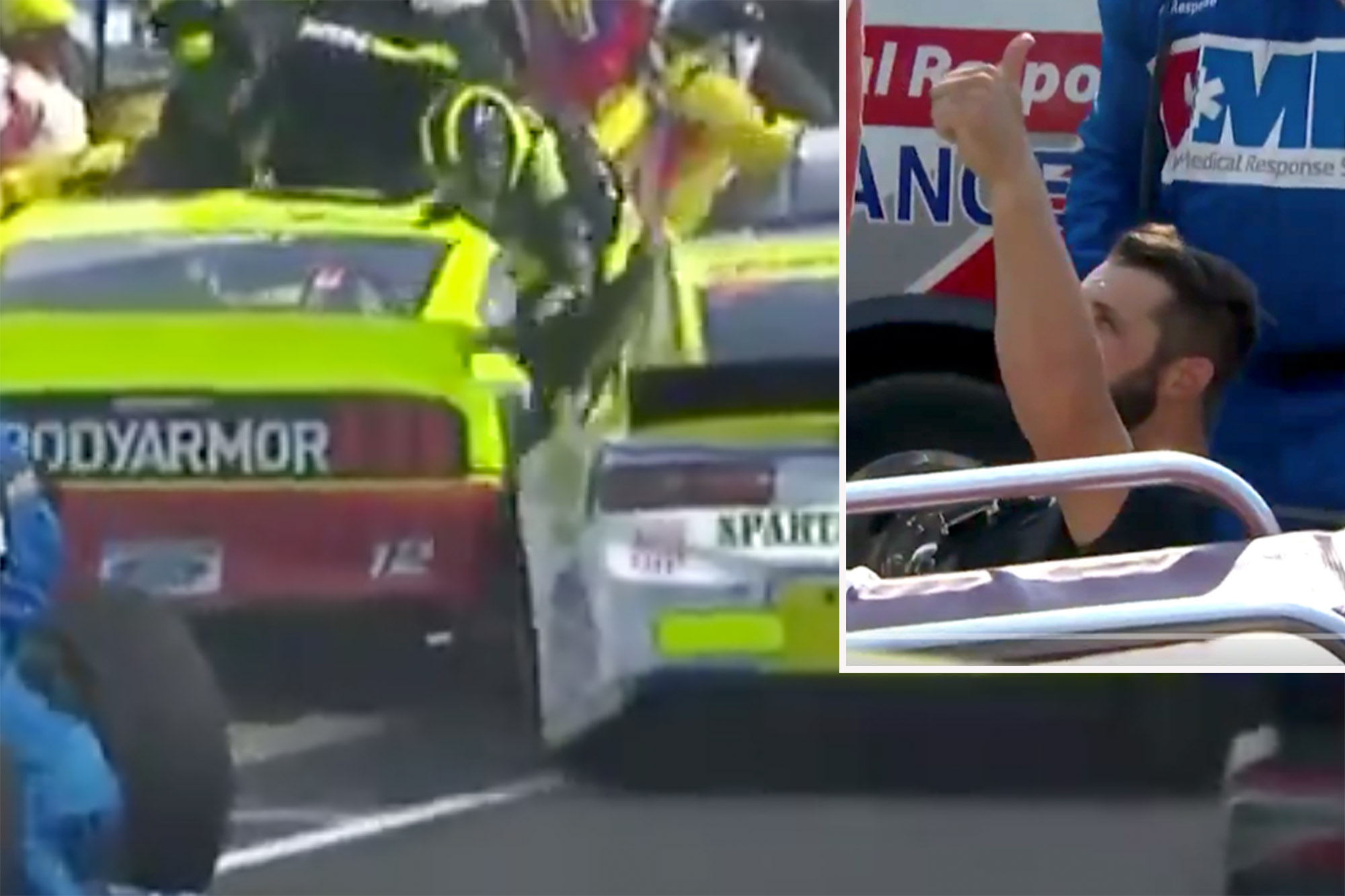 The NASCAR Cup Series opted for an early caution flag at Indianapolis Motor Speedway, but as each car made its way to the pit area, Michael McDowell, who drives the No. 34 Front Row Motorsports car, slammed hard on his breaks while attempting to find the right pit area. This caused a chain reaction behind him, resulting in a multi-car pileup near the pit road entrance.

Seeing the disarray in front of them, two drivers ­– Justin Allgaier and Brennan Poole – veered to the left to avoid the wreck. Allgaier managed to do so safely, avoiding driver Ryan Blaney’s now-sprawling crew members, with some even jumping on top of cars to avoid danger.

Poole was not as successful.

Zach Price, who works in the pit for Blaney’s No. 12 Penske team, appeared oblivious to the turmoil that surrounded him as he attempted to replace Blaney’s front right tire. Poole, who drives the No. 15 Premium Motorsports car, slammed into Price, briefly pinning him between Blaney’s car and his own. Price’s helmet fell off, and he managed to scoot and push himself out of the middle of pit road.

As he crawled out of the danger zone, Price did not use his legs, instead propelling himself with his arms to the alarm of many. Price offered a sense of positivity, however, by flashing a thumbs-up to the cameras as EMTs stretchered him onto an ambulance and rushed him to the hospital.

Price’s wife Tasha was watching the race on TV while their son Maxton played with his friends in the backyard for his 10th birthday. In all the chaos and confusion that marred the Brickyard 400, Tasha was the first to know her husband would be OK, thanks to a phone call from a member of Blaney’s crew. He called Tasha right from pit row and told her Zach was alert and awake with just a possible fracture in his leg. The worst had been avoided.

“I just got off the phone with Zach,” Tasha told the Indianapolis Star. “He was on his way to the hospital. I asked him if his leg was hurting. He said, ‘A little bit,’ but he’s in good spirits. He said he’s waiting on X-rays to see if he has a fracture.”

Tasha brought her son inside to tell him his dad was OK but that something happened, and showed Maxton a replay of the incident.

The pit lane at Indianapolis Motor Speedway is notorious for the calamity it can bring. With a 55 mile-per-hour speed limit, Indy’s pit lane is the narrowest of all the Cup Series tracks. Just moments before the pile up, NBC analyst Jeff Burton noted this, calling it “the thinnest pit row on the circuit. If all these cars are bunched up, it’s dangerous.”

Steve Letarte, who served as Dale Earnhardt’s former crew chief and is now a broadcaster for NBC, described how all the chaos ensued.

“[McDowell] slowed down because he’s pitting directly in front of the 12. So as he slows down, you can see they stacked up behind him, just like on the interstate. When someone slows down, no one’s expecting it, everybody checks up, and, obviously, the chain reaction. There started to be contact and just no room to avoid it.”

Team Penske announced that Price has been released from the hospital and will travel back to North Carolina with the team. They are still waiting on results from the X-ray.

Kevin Harvick, who drives the No. 4 Stewart-Haas Racing car, won the Brickyard 400 after Denny Hamlin blew his front-right tire late in the race. The afternoon will be remembered more for its turmoil and near-disaster, however.

“I’ve been OK since I saw him give the thumbs up (on TV),” Tasha Price told the Star. “He’s a pretty tough guy.”