WhatsApp has announced a selection of fun new features including contact-adding QR codes, animated stickers and dark mode for desktops.

The Facebook-owned chat platform, which has more than 2 billion users worldwide, is making it easier than ever to add a contact with unique QR codes for each user.

Dark mode – WhatsApp’s most-requested feature before it was introduced to iOS and Android in March – now extends to computers.

While a new selection of animated stickers will make interacting on the chat platform ‘even more fun and expressive’.

WhatsApp is also making it easier to engage in group video calls with eight users or less by introducing a one-tap video call icon.

The new features, which will appear on the platform in the next few weeks, have been previewed in a video. 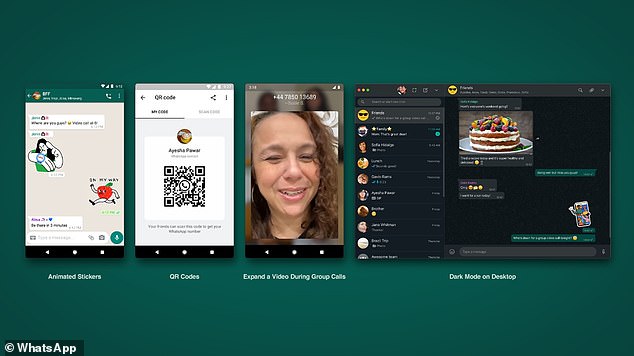 WhatsApp said the new features, previewed in a video, are rolling out over the next few weeks

‘WhatsApp is already used and loved by more than 2 billion people around the world,’ the platform, which was bought by Facebook in 2014 for about $19 billion, said in a blog post.

– Dark mode for the web

‘While our focus remains on providing a simple, reliable and private way for people to chat with friends and family, we also continue to push forward our product design to make sure WhatsApp remains the most useful way for anyone, anywhere to connect.

‘Today, we are excited to confirm some new features that are rolling out over the next few weeks.’

Of the new features, the ones that will benefit the average WhatsApp user the most will be QR codes to add contacts.

Usually, when WhatsApp users want to add new contacts they have to type out the number and save it with the contact’s name.

While this is no great effort, WhatsApp is making the process even easier by distributing QR codes to each user.

When users meet someone new in person, they will be able to scan the QR code with the use of their smartphone camera.

This will automatically find the WhatApp user’s name and number, which users can tap to add to their contacts.

Quicker access to eight-person video calls will also help WhatsApp users during the coronavirus pandemic to stay connected to friends and colleagues. 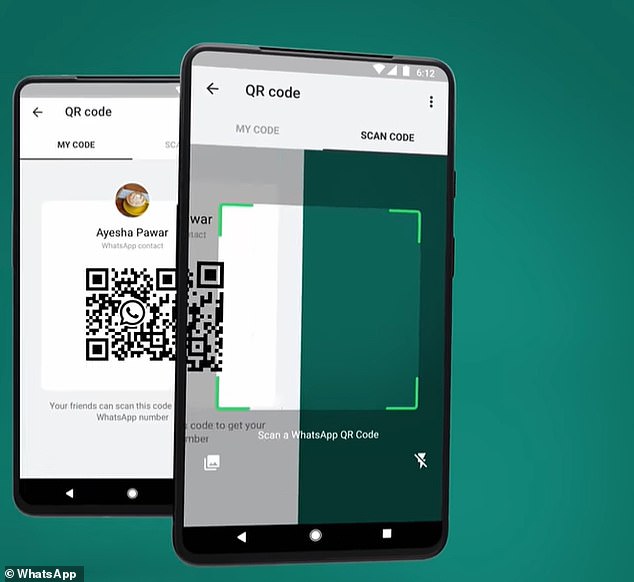 In person, WhatsApp users can hold a personalised QR code up to another user’s phone to add their details to the app 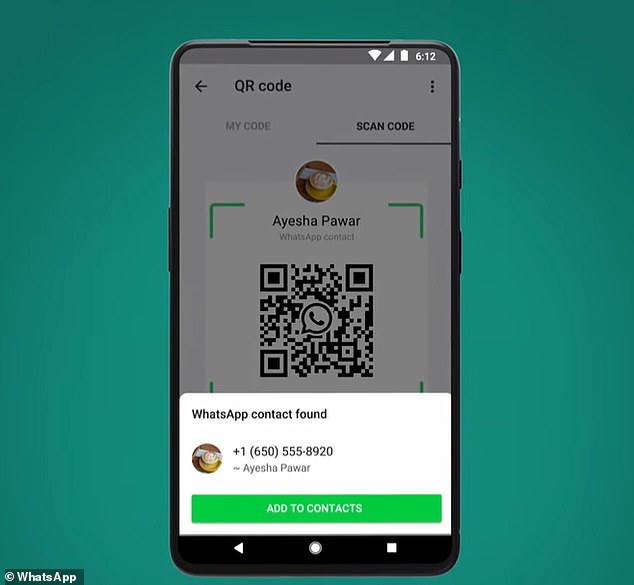 When the QR code registers, users just need to tap ‘Add to contacts’, avoiding the need to tap in digits

The app doubled the number of users that can take part in a single group video chat from four to eight back in July, in direct response to the pandemic.

But now it’s introducing a new video icon in group chats of eight people or less so users can start the call with just one tap.

Users can also press and hold another participant’s chat window to enlarge their video display over the others. 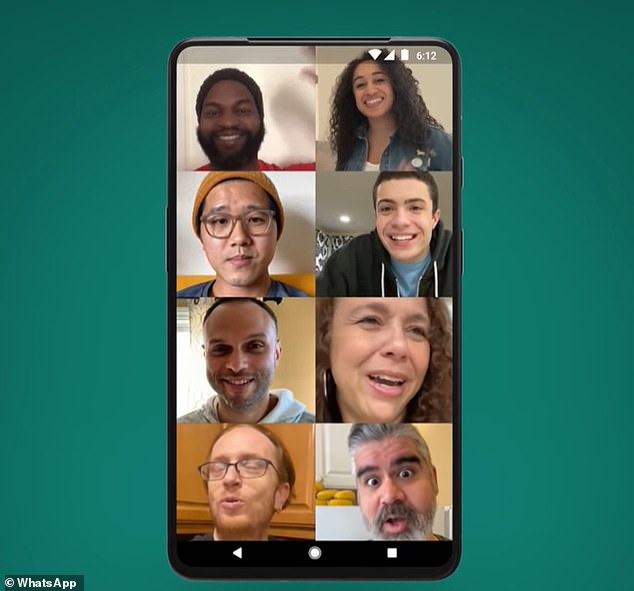 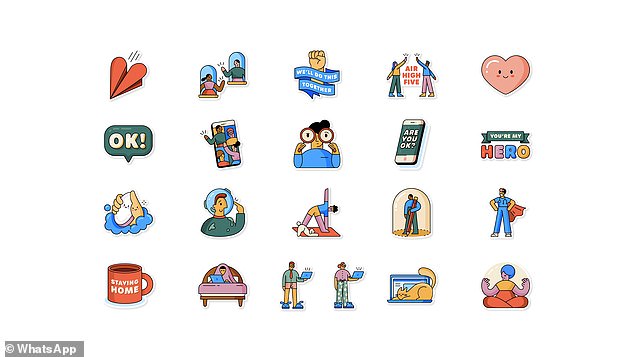 WhatsApp had encouraged encourage people to keep social distancing, to check in on elderly relatives and to wash their hands with stickers released earlier this year

Animated stickers – small animations that users can send in a message thread – are one of the fastest-growing ways people communicate on WhatsApp.

Billions of animated stickers are sent on the platform every day, and as a result, the platform is rolling out new selections.

Although WhatsApp didn’t go into detail about what the new animated sticker selection would include, its video preview reveals a person tapping their watch and a strawberry with arms and legs running.

The platform had previously launched a new sticker pack to help people stay connected, encourage people to keep social distancing, to check in on elderly relatives and to wash their hands. 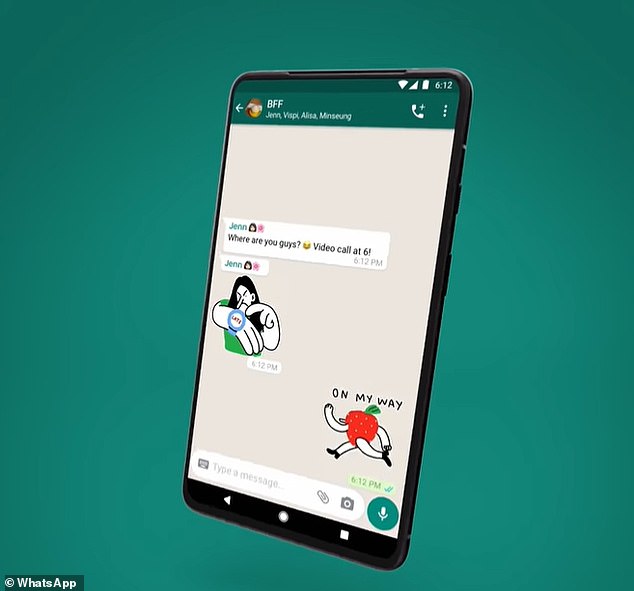 Stickers are ‘one of the fastest growing ways people communicate on WhatsApp’, so the platform is rolling out new animated sticker packs

Dark mode for desktop, meanwhile, will give people who use WhatsApp on their PC the option to turn the background of their app interface from white to black to make it easier on the eye and reduce eye strain in low light environments.

Dark mode, which has become popular with late night social media users, had already been made available on Twitter, Instagram, Reddit, Gmail and system-wide applications on Android and iOS.

WhatsApp was late to roll out dark mode but had said it wanted to make sure it got the feature right. 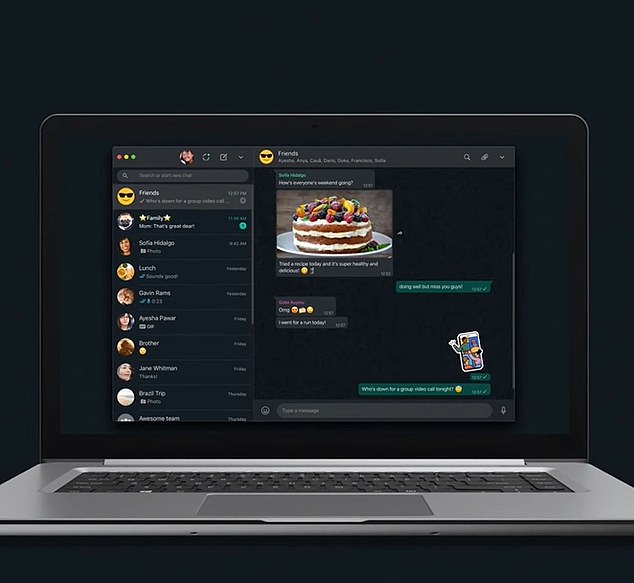 Dark mode was the most requested feature by WhatsApp users before it came to Android and iOS back in March. Now it comes to desktops

Facebook had been planning to introduce adds to WhatsApp via the Status feature before backtracking on the idea earlier this year – for now.

Facebook’s controversial plan to sell ads on WhatsApp was instrumental in the departure of WhatsApp founders Jan Koum and Brian Acton since 2017.

WhatsApp was created by Koum and Acton in 2009 and initially cost $0.99 per year to subscribe – although the charge was scrapped after the acquisition, in 2016, and Facebook has been looking for ways to monetise it ever since.

THE HISTORY OF WHATSAPP

Back in 1996, Brian Acton was the 44th employee hired by Yahoo as an infrastructural engineer.

For the following nine years he worked at Yahoo and lost millions in the dot-com bubble in 2000.

According to his Twitter he was turned down for a job at Facebook in 2009 and also spent a year travelling.

In the same year he bought an iPhone and decided the App Store – which at the time had only been around for seven months – was going to rapidly expand.

Him and his colleague from Yahoo, Jan Koum, decided they wanted to create something.

Koum reputedly came up with the name WhatsApp because it sounded like ‘what’s up?’

WhatsApp was created by Koum and Acton in 2009 and initially cost $0.99 per year to subscribe.

Just one week after he decided he wanted to create the app, he incorporated WhatsApp in California.

WhatsApp’s founders made their position on advertising clear in 2012.

‘Remember, when advertising is involved you the user are the product,’ they said.

‘Advertising isn’t just the disruption of aesthetics, the insults to your intelligence and the interruption of your train of thought.

‘When we sat down to start our own thing together three years ago we wanted to make something that wasn’t just another ad clearing house.’

WhatsApp which was acquired by Facebook for $19 billion (£11.4 billion) in 2014 – the largest deal in Facebook’s history.

WhatsApps $0.99 charge to join was scrapped after the acquisition, in 2016, and Facebook has been looking for ways to monetise it since.

After the acquisition in 2014, Koum reiterated the promise that WhatsApp would never introduce adverts: ‘You can count on absolutely no ads interrupting your communication.

‘There would have been no partnership between our two companies if we had to compromise on the core principles that will always define our company, our vision and our product.’

Koum and Acton then changed WhatsApp’s terms of service to explicitly forbid ads on the platform in 2016 – hinting that the issue of monetisation was brought about by Facebook fairly soon after the acquisition.

However, Acton left the company in 2017 and Koum in 2018 after arguments over ads and user data.

‘At the end of the day, I sold my company,’ Acton later told Forbes. ‘I sold my users’ privacy to a larger benefit. I made a choice and a compromise. I live with that every day.’

Now WhatsApp is one of the biggest mobile messaging apps with 2 billion users globally.

The aim of the non-profit organisation is ‘to develop open source privacy technology that protects free expression and enables secure global communication’.