Home U.S Woman is struck by a train after being pushed onto the tracks...
U.S

Woman, 40, is hospitalized with a head injury after being pushed onto subway tracks at a Manhattan station by a man in a ‘unprovoked’ attack – the second shoving incident in 14 hours

A woman was hospitalized with a head injury on Thursday morning after being pushed onto the tracks at a New York City subway station and struck by a train.

The incident happened just before 8.30am on the northbound 4/5/6 platform at the 14th St – Union Square station.

The man who shoved her off the platform into the path of the oncoming train was arrested at the scene, the New York City police department confirmed.

His charges are pending and a motive is not known but cops say the attack was ‘unprovoked’.

Thursday morning’s assault was the second time in 14 hours that a person was pushed onto NYC subway tracks by a stranger. 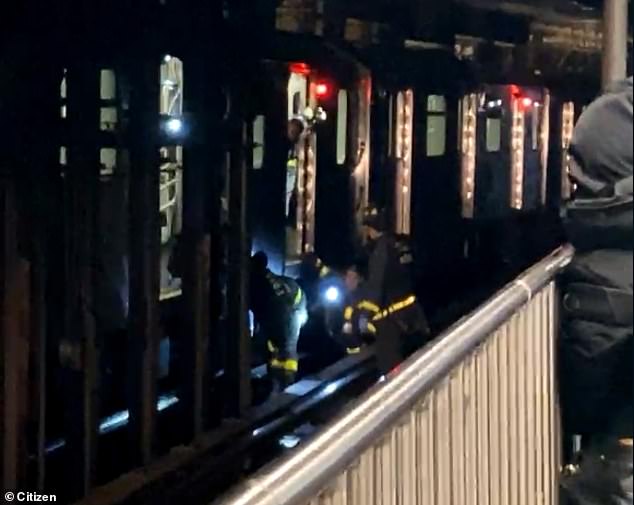 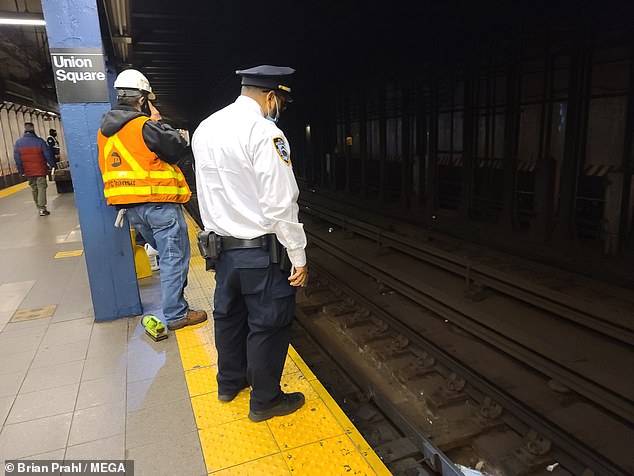 According to CBS, witnesses said they saw the suspect, believed to be in his 20s, pacing and muttering to himself on the platform before pushing the woman as the train pulled in.

‘A suspect was immediately taken into custody after a vicious and unprovoked assault at 14th St Union Sq,’ NYPD Transit said. ‘This is an ongoing investigation.’

They found the unidentified 40-year-old woman trapped under a 5 train and FDNY ordered power to the tracks to be shut down as they pulled the victim out.

She had allegedly been able to lay flat on the track bed as the train went over her, avoiding major injuries. Two subway cars passed over her before the train came to a stop.

Her injuries were considered non-life-threatening and was taken to Bellevue Hospital, cops said.

‘It was by the grace of God that she sustained only minor injuries,’ NYPD Transit Chief Kathleen O’Reilly said.

‘Twenty-two million passengers pass through this station every year, so it’s fortunate for us that our officers knew exactly where they needed to be.’

Witnesses pointed out the attacker and he immediately surrendered to an MTA train service supervisor by lying on the ground, the New York Daily News reports.

On Wednesday evening, a 36-year-old man was beaten and shoved to the train tracks at 42nd St.-Bryant Park by a panhandler.

The man had allegedly refused to give his attacker change. Cops are now looking for a suspect who was pictured wearing a red tracksuit.

NYPD have asked anyone who witnessed the attacks to call 800-577-TIPS.

Google is being strongly criticized for the departure of its well-respected co-founder of the ethical Artificial Intelligence (AI) division, amid a row over...
Read more
U.S

President Donald Trump has arrived at a rally in Valdosta, Georgia where he will throw his support behind two Republican senators facing January runoffs, hours...
Read more

The family of Roald Dahl, who penned the children’s classics “Matilda” and “James and the Giant Peach,” has quietly apologized for the late...
Read more

The mystery shrouding the metal monoliths discovered across the globe appears to be revealed after a New Mexico art collective claimed responsibility. Conspiracy theories...
Read more

FA Cup 'set to switch to FIVE substitutions' to the delight...
Read more

A gang of thieves in Brazil are being compared to Robin Hood and his Merry Men after leaving bank notes strewn behind in...
Read more
Load more

New Mexico artist collective claims they are behind the mysterious steel...

FA Cup 'set to switch to FIVE substitutions' to the delight...