The world’s largest all-electric aircraft is set to make its maiden flight today and will stay in the air for up to half an hour, according to manufacturers magniX.

For the first flight a test pilot will take the skies alone but the plane can seat nine passengers. It will take off at 16:00 BST (08:00 PST) if the weather is clear.

To develop the plane the team took a Cessna Caravan – one of the most used medium-range planes in the world – and retrofitted an electric engine.

Called the eCaravan, the plane will fly over Washington State, US for 20-30 minutes over Moses Lake at a speed of 114 miles per hour for its inaugural flight. 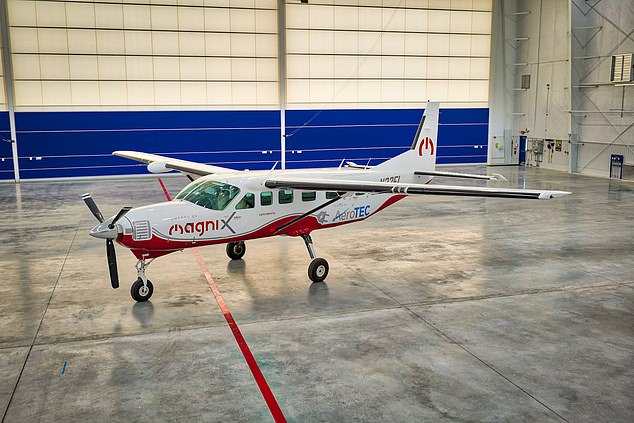 The world’s largest all-electric aircraft is set to make its maiden flight today and will stay in the air for up to half an hour, according to manufacturers magniX

MagniX developed the electric engine that runs inside the Caravan frame and hope to have it in commercial service by the end of 2021 with a 100 mile range.

Roei Ganzarski, the CEO of magniX, told the Guardian that electric engines for aeroplanes were essential for reducing the carbon emission impact.

He said electric planes will actually be cheaper to operate due to the reduced need for fossil fuels – between 40 per cent and 70 per cent cheaper per flight hour.

‘That means operators will be able to fly more planes into smaller airports, meaning a shorter and door-to-door experience, with no harmful CO2 emissions,’ he said.

He said all flights of under 1,000 miles will be made by all electric aircraft within the next 15 years but battery technology needs to improve first.

It is currently better suited for ultra-short flights of about 100 miles – when the electric engine is added to an existing aircraft. 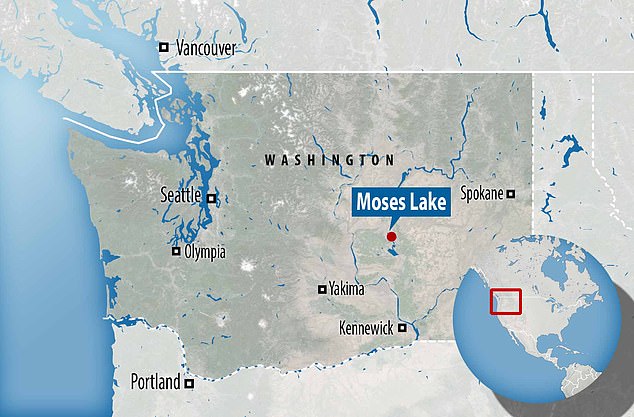 Today marks the first flight test of the 750-horsepower magni500 all-electric propulsion system on a Cessna 208B Grand Caravan in Moses Lake, Washington

Current battery technology can support a range of up to 500 miles on a custom aircraft designed around the benefits of an electric motor, said Ganzarski.

They have retrofitted an engine to the Cessna 208B Grand Caravan light aircraft as a way to show it is possible to turn existing commercial planes into electric models.

Today marks ‘the first flight test of the 750-horsepower magni500 all-electric propulsion system on a Cessna 208B Grand Caravan in Moses Lake, Washington’.

MagniX said they have been ‘working hard magnifying the aircraft and converting it from its gas guzzling, emission creating, old self, to an all-electric, low operating cost, clean aircraft.’

‘Following in the footsteps of the historic world’s first flight of the all-electric commercial aircraft – the eBeaver with Harbour Air – the eCaravan will showcase one of the world’s most-used Middle-Mile aircraft going all electric.’ 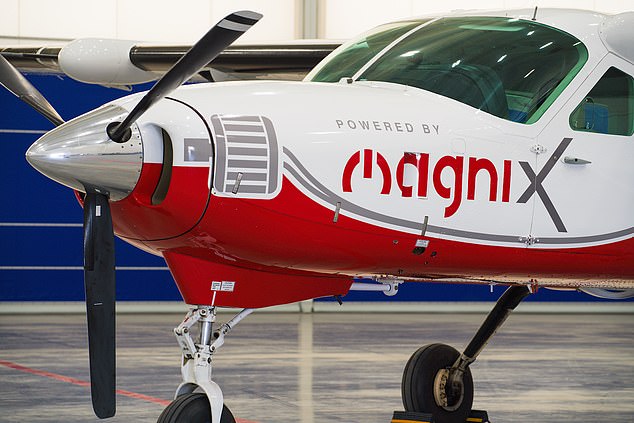 The magni500 electric motor being added to the eCaravan could also be used in similar aircraft such as the King Air, Otter or DH-Beaver seaplane.

The Caravan has been used to transport people and cargo since it was first launched in 1992 and magniX say they’ve made few modifications to the original design.

The company says it could be possible to operate 100 seat aircraft on an engine powered purely by electricity with no fossil fuels – but it is likely decades away.

Ganzarski said, ‘It’s a niche market. But we can start now, get working on it and push the envelope to progress the entire industry,’ and added, ‘Let’s get to market quickly for the main purpose of being able to start this revolution.’

Major players like Airbus, Embraer and Rolls-Royce are also working on electric aviation and NASA recently created a ‘test design’ for the future of eAviation.

MagniX were also the first company to test an entirely electric commercial flight – in the smaller eBeaver seaplane. This new test will take it to the next stage.